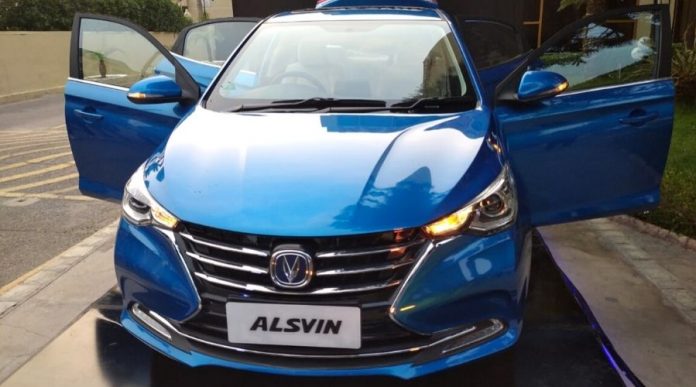 Changan Alsvin was launched by Master Changan on December 11, last year in a large-scale press conference through digital video in Karachi’s Marriott Hotel. The launch was followed by the start of production at their factory in Karachi on December 14. At the launch prices of Pakistan’s maiden Euro 5, Smart Sedan was not revealed.

The CEO Master Changan, Daniel Malik presented the idea behind Changan Alsvin and said, “Our next car is a concept of the same winning philosophy where the customer does not have to compromise on his dreams.

“This is a car that will transform the Pakistani automotive industry by bringing features and technology to customers in a segment that they could have dreamed of before.” He added.

Exactly one month after Changan Alsvin’s launch on Monday, January 11, Changan Pakistan announced the price of the much-anticipated Alsvin car.

The Alsvin will be offered in three variants, which are as follows:

While revealing the price of Changan Alsvin”A smart sedan,”Danial said, “Alsvinis not a cheap car, but the price offered is much higher than its value. Alsvin brings a high level of customer service and safety standards built into Pakistan, from our state of the art plant to RHD’s export base for Changan vehicles from Pakistan to the world.”

The 1.37L 5-speed Manual Transmission costs Rs 2,199,000, 1.5L 5-speed Dual-clutch Automatic Transmission Rs 2,399,000 and the top-of-the-line 1.5L LUMIERE Rs 2,549,000. All prices are pre-sold which means that both Peshawar and Karachi customers can buy at the same price, without paying additional shipping costs.

While explaining the strategy of pricing, Shabbir Uddin, Director of Sales and Marketing said: “The initial price is much lower than most of the hatchbacks available in Pakistan whether they are locally assembled or imported from Japan. While the price of the 1.5L DCT LUMIERE is almost the same as the released models some subcompact sedans are integrated locally.”

“Other features available in the 1.5L DCT Lumiere edition compared to the high price of other comparable cars in this category are Sunroof, Cruise Control, TPMS, Start-Stop Technology and Heated side mirrors. Such features cost at least Rs 200,000 more than one comparable model costing approximately Rs. 3,000,000. Alsvin thus offers a total of 3.2million at a cost of Rs 2,549,000.” He added.

Cars in Pakistan are heavily taxed. Retail prices are charged at 17% Sales Tax and 5% FED at sales level in addition to custom services. So the retail price of Alsvin 1.5L DCT Lumiere edition of Rs. 2,549,000 is actually only Rs 2,075,000 excluding Sales Tax and FED. The government should look at tax cuts to make cars more affordable for people and increase the total amount that will result in a government increase.

“The company has taken many steps to prevent investors from jumping into the fray. One of them is one car per CNIC. A lucky draw of 1,000 customers from the 17,000 pre-bookings received and gave them the first opportunity to book between 11 and 13 January. In addition, we will provide 1 year maintenance money to real customers who first book in his name, pay for themselves and register a car in his name, he added.

Master Changan Motors Limited acquired Greenfield status under the Auto 2016-2021 Auto policy and entered into a joint venture with Changan vehicles with an initial investment of $ 100 million – the largest investment of its kind by OEM in Pakistan’s history. The company established a plant in Karachi with an annual production capacity of 30,000 units. JV has also invested $36 million to launch Alsvin in Pakistan and aims to bring a few exciting models by June 2021.

Changan is the 1st Chinese domestic car manufacturer in a row for the past decade. The company invests 5% of its annual revenue from R&D which gives it an excellent boost to the automotive technology that has allowed them to introduce independent driving technology in China. Changan has a variety of well-designed and high-end sedans, SUVs, MVPs, LCVs and is on track to install electricity in all its variants by 2022. In their next phase, Master Changan Motors plans to introduce these electric vehicles in Pakistan as well.