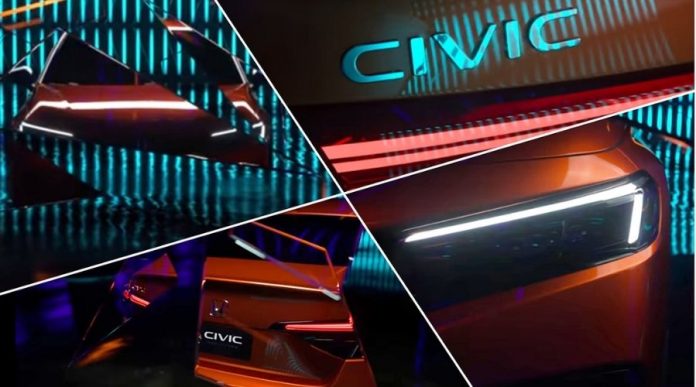 It was just announced by Honda that Honda Civic’s prototype will be launched on November 17, 2020. This prototype will give a good idea to all the anxiously awaiting Honda fanatics how the 11th generation Civic will look like.

The glimpses were enough to show that the next-generation Civic will be similar to its patent images leaked earlier. The extravagant styling which was unquestionably very bold in terms of design and profile in the 10th generation Civic is also gone.

That boldly look is replaced by a very dignified and executive look with a revised solid-wing fascia up front, accompanied by redesigned bumpers with a larger air dam, and a flatter with a longer bonnet as compared to the previous generation.

According to Pakistan Standard Time (PST), the new generation Honda will be revealed on November 18, 2020 at 7:45 am through a live twitch stream. So all the Civic enthusiasts mark your calendars for the most awaited launch of the year!

As per the reports, Honda has planned to launch Civic 2022 as a sedan and a hatchback, therefore 2 door coupe will no longer be continued. However, the teaser also highlighted the mental image of the Civic and it looks like it might be a bit sharper and a bit aggressive.Other detailed specifications of the 11th generation Civic are not being revealed yet but the reports suggest that there will be a-Si and a Type-R model in the international market.

All Civics shall feature naturally aspirated and/or turbocharged 4-cylinder engines that provide varying power figures with respect to the model. The platform is reportedly an evolution of the current Civic model and the sportier versions shall get a manual gearbox option as well.

The new generation Civic is expected to be available in the US auto market next year by fall but yet no reports have been received about its launch in Pakistan. Civic is always launching a year late in Pakistan so it is expected that it will also be launched a year late but it’s too soon to confirm amid the pandemic.