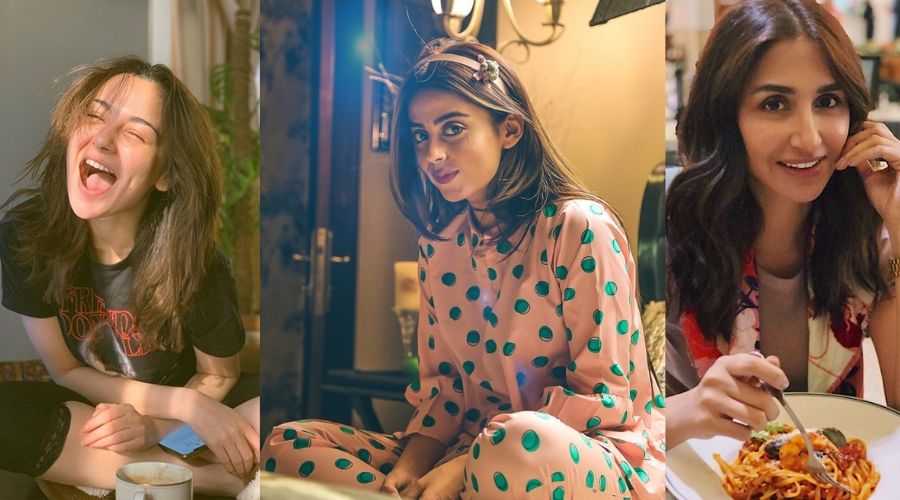 Gone are the days when Pakistani actresses were limited to just one or two dramas on TV every week! It’s the new era of YouTube, V-logging and staying connected with fans 24/7. Just like many Bollywood and Hollywood celebs, our actresses have also joined the bandwagon of launching their own YouTube channels.

Yes! Many of our favourite actresses have created their own YouTube Channels to give their fans a peek into their lives and to stay connected and relatable in the virtual world. The content ranges from beauty to fitness, social awareness and much more!

The uber-cool actress who has been active in the Pakistani Drama Industry for years, Hira Tareen, is also one of the most popular YouTube content creators in Pakistan. Starting her channel only a year back, Tareen has been able to garner more than 60,000 followers on her channel. Her video content is a mix of travel vlogs, life updates, makeup tutorials and much more.

Hira also teams up with her husband, Ali Safeena, the hilarious actor who was last seen in the hit “Suno Chanda”, to bring videos like “Husband Does My Makeup” or special cookery classes with him. Her main pull is her sense of style and graceful persona which is unlike anyone in the industry at the moment.

Recently, Hira has been uploading content that’s useful during the current lockdown due to the Coronavirus spread, like 8-Minute fitness regime and also entertaining videos of routine with husband during the quarantine.

The quirky girl-next-door of, Hania Amir, has managed to win the hearts of millions of Pakistanis with her performances in dramas like “Ana”, “Titli” and many more. Now delivering even more exclusive and personal content, Amir has joined the world of YouTube. Starting the channel at the start of 2019, Amir did not start posting regularly until 2 months ago.

With her channel having more than 250K followers, her new videos get millions of views. Amir posts life updates, cooking videos, BTS from her dramas along with her cast members, travel Vlogs and exclusive content with stars like Feroze Khan and Asim Azhar.

Her videos with Asim Azhar specifically are much to the delight of her fans as speculation about their relationship is the talk of the town and his rare appearance in the videos just fuels the gossips mills!

Another style icon that has graced YouTube is the famed actress of “Bulbulay”, Ayesha Omar. Starting her channel in 2019, Omar has garnered over 100K subscribers. As a content creator on YouTube, Omar makes videos on several things like beauty tutorials, fitness regime, BTS of fashion editorial and red carpet events, Omar brings a lot to the table.

Her channel has also been given a breath of life with regular postings rather than once or twice a month because of the lockdown with Omar giving people tips on how to keep safe during the widespread pandemic. Ayesha also directs all her videos herself because of the long years she has spent in the industry, she has picked up a few tricks.

“I wanted a more permanent platform because Instagram stories are not permanent,” says actress and YouTuber Ayesha Omar.

Making waves in the industry with her quirky and hilarious performance in “Suno Chanda”, Iqra Aziz is giving a chance to her fans to take a peek into her life on her YouTube channel. Still, in its early days, Iqra’s channel has gained more than 100K subscribers already. From Vlogs in Hum Awards to Beauty Tutorials, Iqra’s channel has it all.

You can also enjoy her recent travel Vlogs to America where she has documented her trip to the Disney Land and much more. Even Iqra’s mother has made an appearance on the channel highlighting a social issue of not wasting our resources. Iqra also shares helpful tips on how you can design your living area with her husband, Yasir Hussain.

The “Humnasheen” actress Arij Fatyma, though not very active in the drama industry anymore, has been connecting with her fans as a YouTuber. Fatyma is currently settled in Michigan, U.S., along with her husband, but visits Pakistan frequently for shoots. Her channel has gained popularity with over 180K subscribers.

Arij covers a lot of content on her channel like Beauty Tutorials, Travel Vlogs and her special Recipes. Arij’s husband also constantly makes an appearance on her channel alongside her. Arij also came clear with her subscribers about her second marriage, her struggles through with her first husband and gave constructive comments on how to deal if such situations arise in their lives after receiving 100K plus comments on the matter.

Arij has developed a trusting relationship with her subscribers which is the reason for the growth of her channel.

Renowned actress of the Pakistani Entertainment Industry, Juggun Kazim, is one of the most followed celebrities in Pakistan followed on YouTube. Now running for almost two years, Jugguns channel has garnered over 400K subscribers. Juggun is the celebrity that constantly uploads quality content and her channel is stacked with videos that can entertain as well as educate. Mainly focusing on health, fitness and eating, Juggun also creates videos where she interviews famous personalities like Mubashir Luqman on pressing topics.

Juggun also addresses socially charged messages like body shaming on her channel which diversifies the range in her videos. With her Lahori charm, Kazim is here to stay as she is backed by a strong and loyal following.

After hailing as the morning show legend for years on TV, Nadia Khan has now ventured into the world of YouTube with her beauty channel named ‘OutStyle.com’. Nadia is cheerfully interactive with her quirks and always fun to watch for her subscribers.

With over 650K subscribers strong, Nadia Khan is striding her way to the top. She shares different tutorials and health tips on her channel outstyle.com. Her channel deals with the topics of beauty, health and lifestyle.

Hina Altaf is the new kid on the block in the Pakistani Drama Industry with hits like Udaari and Gumrah under her belt, now Altaf is producing content as a YouTuber. She gives talks on healthcare, beauty and fitness tips as well as have a go at fun challenges.

The beauty videos on her channel are very informative as she interviews dentists & aesthetician Dr.Hina Siddiqi who gives skincare tips. Just a year old, Hina has more than 100K subscribers on her channel. Hina also does travel vlogs every chance she gets and also great casual content for her fans to have a day in the life of a megastar.

Noor Bukhari is a long time actress who turned into a YouTuber, having more than 350K subscribers on her channel. This veteran actor creates content mainly makeup tutorials the most because she gets a lot of requests for them. Noor Bukhari’s content also revolves around showing her personal life and routine. There is no fancy editing in Noor’s videos, she just pumps out the content requested by her subscribers without too many frills.

Noor also likes many celebrities to create social awareness videos on topics that are prevalent in the community. And ever since becoming more religiously conscious, Noor is asked for advice by all her subscribers on dealing with different situations in life and Noor addresses them all.

This young actress who has been making headlines with her stellar performance in the hit series “Pyaar Kay Sadqay” became a YouTuber not that long ago and gained 35,000 subscribers already. Yashma’s channel has a very easy-going vibe about it as she posts a lot of challenge videos along with Vlogs in which she takes her subscribers along with her on a journey. There are also beauty videos that Yashma shares on the request of her subscribers.

Yashma has shared her journey on her YouTube channel from becoming a Muslim after an atheist.