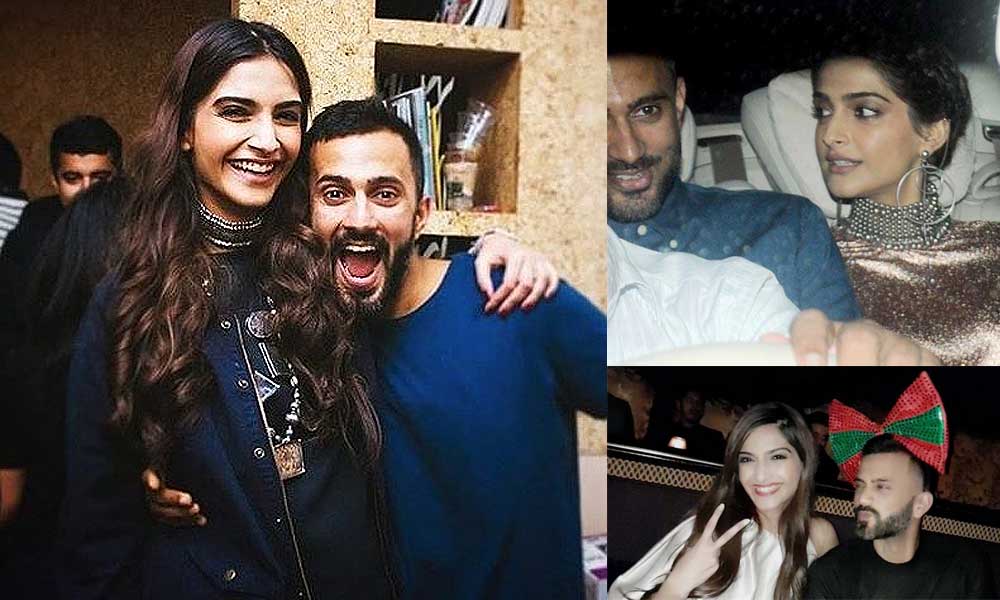 Sonam Kapoor, the tinsel town’s gorgeous and the sexy actress has been doing the rounds on the internet about her relationship with Anand Ahuja. Yes! Looks like soon Sonam is taken as she is seen spending time with her alleged boyfriend, Anand Ahuja. The Khoobsorat Actress might have denied and hushed the media and rumours of her dating anyone but it is evident from her Instagram pictures, Snapchat stories that the Diva is dating Anand Ahuja, a Delhi-based businessman.

Despite the media asking Sonam Kapoor about her relationship status, She has always said that she is single but not anymore! looks like the Diva is madly in love with Anand Ahuja, a Delhi-based shoe designer. Although she has chosen her beau outside the glamorous showbiz world,  it is evident from her pictures that both of them are happy with each other.

Lately, the couple has been spending some quality time together, be it at parties, outings, New Years celebration or  Anil Kapoor’s 60th Birthday party. You will be able to spot the beau Anand Ahuja in all these pictures. Looks like he is soon to become the part of the family too.  Not only this, Sonam has also be seen supporting Anand’s brand Bhane, sporting some great looks from the label.

Who Is Anand Ahuja?

Coming on to Anand Ahuja, well the handsome hunk is a business man and into apparel and fashion industry. He has done his schooling from American School and MBA from Wharton Business School.  His Instagram account reveals much about his love for sports and his personality as someone who likes to be in his own world.

Moreover, He is also the Managing Director (and owner) at Shahi Exports ( A business owned by his family which is the largest export house). Apart from having his own brand “Bhane”, he is also co-founder of India’s first and only sneaker store, Veg Non Veg.

The couple had a great time celebrating New Year together. Sonam posting a cute greeting picture of both of them is a proof there is something going on!

Looks like they are heads over heels for each other.

Celebrating holiday together in London? Hell yes! looks like they are having fun together while enjoying each other’s company.

Who knew, Anand was also spotted in the 60th Birthday celebration of Anil Kapoor. Sonam is making sure Anand gels in with the family well.

Meeting friends and family together? What would it mean if not a relationship?

Partying together to matching clothes colour. The couple is making sure to give their fans a little sneak peak about their relationship. Isn’t it right?

This short clip is evident enough that the couple has been spending time together be it London or spending winters in Amsterdam.

Let’s wish and hope that we get to hear the news about the fantastic couple getting hitched soon!