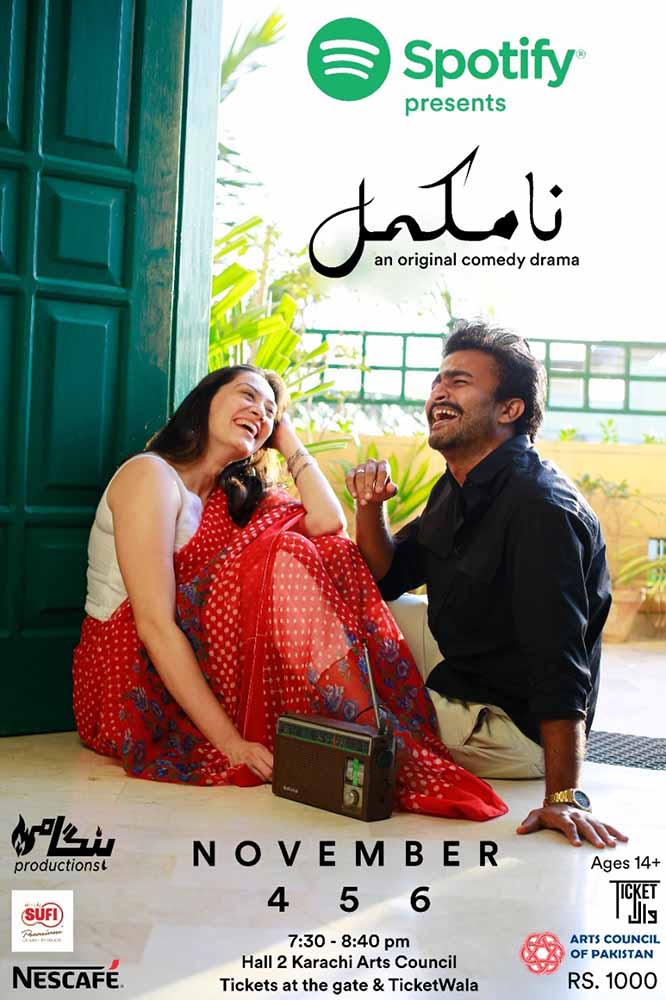 Stepping into the world of theater, Spotify, the world’s most popular audio streaming platform, is partnering with the critically acclaimed play Na Mukammal as the title sponsor. The much anticipated play returns with more shows to be held this month in Karachi, Lahore and Dubai.

An original comedy drama centered around music, Na Mukammal is written and directed by Hasnain Raza who is possibly the youngest and the first to have penned an original play in over 5 years in Pakistan. The musical drama uniquely showcases two stories that run parallel and explores identifiable universal themes of love, loss and longing set against the 70s and 90s where music unites the characters and stitches the story together.

“I wrote this play only so I could play all my favorite songs in a large theater hall. When I penned it, I didn’t have any grand ideas for the story, just my love for classical jazz. My friends hated my playlist so I wrote this play, casted them [for the initial run] and made them fall in love with the music,” said Hasnain Raza, writer and director of Na Mukammal.
The play is produced by award winning documentarian turned actor Hani Taha under her banner Hangami Productions that produces only original theatrical content. Hani is possibly Pakistan’s only professionally trained female actor and producer actively doing theater in the country. Na Mukammal’s November run is her third production this year.

“When I first saw Na Mukammal staged, I was blown away by its use of music, live rain, exquisite lights and a story so fresh and impactful that we had never seen in Pakistan. In over 5 years something original was put out and I instantly knew that this was a project that needed to be shown across the world as an emblem of our culture,” said producer Hani Taha on why she chose to bank on Na Mukammal.

“Music and art go hand in hand, and we are excited about our collaboration with Na Mukammal, where music is playing the central character and is pushing the story forward,” said Talha Hashim, Spotify’s Marketing Manager for Pakistan, Bangladesh and Sri Lanka.
After its shows in Karachi starting from November 04-06, at the Arts Council, the play will travel to Lahore to the Al Hamra from November 25-27, and then to Dubai on January 06-08. Na Mukammal will be the first Pakistani production to be staged at the prestigious Alserkal Avenue in Dubai, and the only second production to ever go to Dubai from Pakistan.

The soundtrack of the play is available on Spotify. You can listen to it for free here.