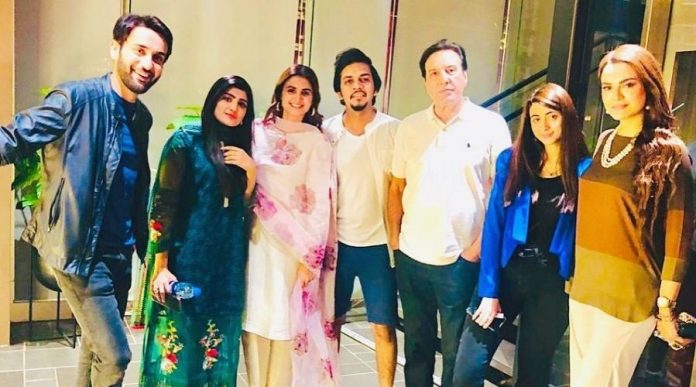 One of the most sizzling on-screen couple these days is of Hira Mani and Affan Waheed and it seems that audiences cannot get enough of them as yet another drama serial, “Yun Tou Hai Pyaar Bahot” was just announced starring the hit couple.

This drama would mark the third collaboration between Hira Mani and Affan Waheed as both the actors have previously worked together on the hit serials “Do Bol” and “Ghalti”.

Hira Mani shared the BTS of the drama with the caption: “New Words, Same Us”

The drama will be airing on Hum TV and is produced by Momina Duraid and Kashif Nisar.
The supporting cast includes the legendary Javed Shiekh along with Maria Mirza and Nadia Hussain. The drama has been written by Aliya Bukhari.

As for the story of the drama serial, Affan Waheed had said about it that it is a love story between two people who had life all figured out and were set in their until their paths crossed and all plans went sideways from there.

Hira Mani and Affan Waheed are also all set to appear together in an upcoming web series “Wo Dus Saal” but due to lockdown amidst coronavirus pandemic spread, the shooting had been delayed.

Hira Mani continues to impress with amazing serials in a row and doesn’t seem to be stopping anytime soon. She is seen these days on the amazing series “Kashf” that opens up the reality of Pirs and Asthana culture of Pakistan.