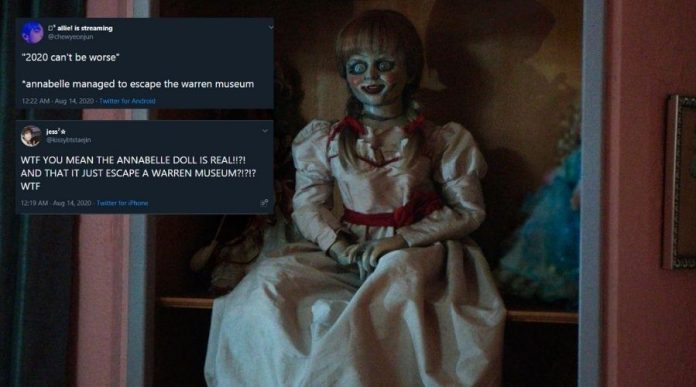 If someone would say that “2020 cannot get any worse”, well we all have been proven wrong as a haunted item as scary as the “Annabelle doll” from the Conjuring series has disappeared.

This demonic piece of ‘Raggedy Ann’ was recently rumored to have escaped the Warren’s Occult Museum in Connecticut, USA.

The Annabelle doll currently resided at the Warren Occult Museum. The museum was started by late paranormal investigators Ed and Lorraine Warren, as seen in The Conjuring franchise.

The Annabelle doll is shown to be a carrier of evil spirits and keeps haunting various individuals over the course of almost 5 movies.

After its disappearance, it became the most trending topic and has gained over 250,000 mentions on the social media platform.

The rumours of the doll escaping started to circulate after a now-deleted update to the doll’s Wikipedia page claimed that Annabelle escaped in the early morning hours of August 14.

“I don’t know if you want to hear this or not, but Annabelle did not escape,” Spera said, son-in-law of the infamous paranormal investigators Ed and Lorraine Warren and the current owner of the Warren’s museum, standing in front of the caged doll. “Annabelle’s alive – well, I shouldn’t say alive – Annabelle’s here, in all her infamous glory. She never left the museum. Remember, I have high-tech security here. If she had left the museum I’d instantly know if something happened or somebody broke in.”

But this did not stop people from having a little scare and a lot of fun of their own.

My whole tl is full of that doll, Idk but I'm really scared asf rn,, omgg 😭😭😭

#Annabelle
The guards looking at each other after seeing annabelle case empty: pic.twitter.com/bVEuSZaICQ

#annabelle on her way to wake up her demonic friends 😜✨ pic.twitter.com/iv5HfOZ6gG

me after seeing #Annabelle leaving the warrens museum: pic.twitter.com/Bh7Weiw6ZN

Annabelle was acquired by the duo, Ed and Lorraine Warren, in the 1970s. The Conjuring series are based on the real life adventures of both the paranormal activity investigators.