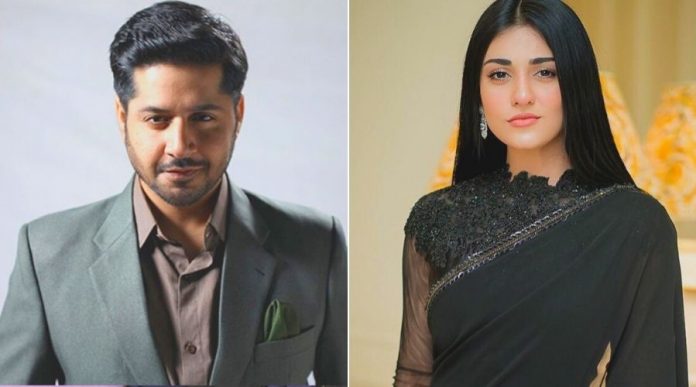 Making waves with their stellar performances in their own right, Sarah Khan in “Sabaat” and Imran Ashraf in “Mushk” have become audience favorite, and the two are now coming together for an upcoming drama serial “Raqs-e-Bismil”.

To be directed by the famed director and YouTuber, Wajahat Rauf, the project was announced earlier this month by Shazia Wajahat, who announced working on an upcoming drama with Hashim Nadeem, who has penned the script of Raqs e Bismil.

Raqs-e-Bismil also marks the television screen comeback of Wajahat’s directorial after the halt of 3 years.

Shazia Wajahat and Momina Duraid will be co-producing the play and the serial will be airing on HUM TV.

This will be Sarah’s first project after her marriage with singer Falak Shabbir as the actress shared the news on her Instagram story saying: “Raqs e Bismil” on floors now,” she posted.

“A beautiful script, written by Hashim Nadeem and directed by Wajahat Rauf. Produced by Shazia Wajahat and Momina Duraid.”

Shazia Wajahat shared about the project, “Raqs-e-Bismil is an intense story of love and passion between two souls from different worlds.”

Shazia Wajahat also mentioned it is likely to be released at the end of this year.

The audiences are very excited nonetheless to see the pairing of Sarah Khan and Imran Ashraf for the first time and expect fireworks when the two talent powerhouses share the screen.