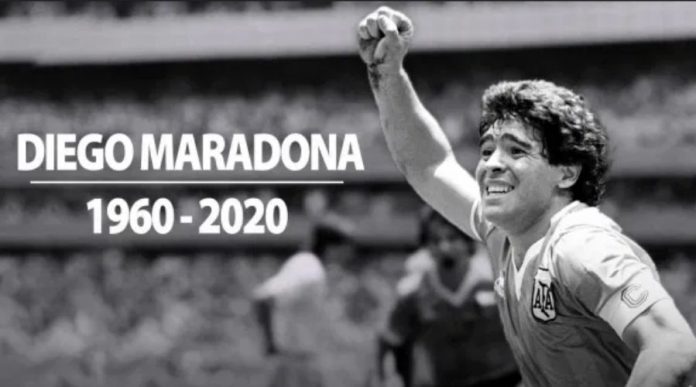 Football legend and FIFA World Cup winning captain Diego Maradona dies at the age of 60, due to cardiac arrest. The former attacking midfielder of Argentina suffrage a lethal heart attack at his home in Buenos Aries. Earlier in November, he also had a successful major surgery on a brain blood clot and was to be treated for alcohol dependency.

The legend Argentinian captain is known for his famous goal against England in the 1986 FIFA World Cup quarterfinals, which kicked England out of the tournament. His goal was called “Hand of God.” Later, Argentina went on to win the world cup under his captaincy.

Argentinian President, Alberto Fernandez, declared three days of national mourning and said “You (Maradona) took us to the top of the world. You (Maradona) made us immensely happy. You were the greatest of them all.”

The football great once again led Argentina to the 1990 final held in Italy but West Germany defeated them. In total, he bagged 34 goals in 91 appearances for his football team and represented Argentina in four World Cups. Maradona played for Barcelona and Napoli during his club career, winning two Series A titles with the Italian side.

During the second half of his career, Maradona struggled with cocaine addiction and was banned for 15 months after testing positive for the drug in 1991.

The sad news was confirmed by Maradona’s lawyer. Soon, tributes were pouring in from all over the world of football.