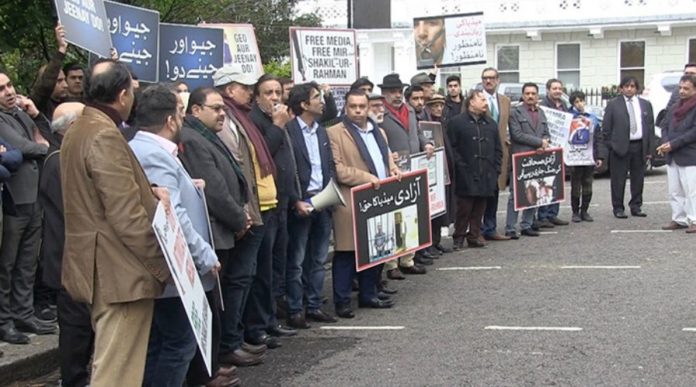 Completing its 87th day on Monday, countrywide protest by the workers of Geo and Jang Group along with the Pakistan Federal Unions of Journalists, representatives of the civil society and political parties against the illegal arrest of Editor-in-Chief of Geo/Jang Group Mir Shakil-ur-Rahman continued.

Holding placards for his release and condemning curbs on the freedom of media, the protestors condemned the conspiracies to close down the Geo and Jang Group.
They said the government is violating not only the constitution but also the human rights with keeping Editor-in-Chief of Geo and Jang Group Mir Shakil-ur-Rahman in illegal custody without any charge.

Editor The News Aamir Ghauri said that the Tehreek-e-Insaf failed to provide justice. “We hoped that the courts will provide justice on June 11 like the British courts,” he said.
The protestors complained that 87 days have gone by since the illegal arrest of MSR without any charge.

Protesters vowed to continue their protest till the release of MSR and withdrawal of cases filed against him.

Speakers pointed to the fact that Mir Shakil-ur-Rehman was in jail even in Ramadan despite those claiming to make Pakistan a Madina-like state. They threatened to launch an anti-government movement across the country if he was not released.

Jang’s Group Editor Shaheen Qureshi demanded the government release Rs6 billion in dues of media houses immediately so that media workers could be paid their salaries and dues under difficult times. He said the government had acknowledged Rs3 billion arrears so far but still was not ready to release that amount despite making promises. He warned that Pakistan was already placed in the grey list regarding the freedoms in the country by the FATF.

Zaheer Anjum said Mir Shakil-ur-Rahman should be released as his arrest was a move to usurp media freedom. Already the results were coming out and the arrest was leading to the crumbling of media itself after curbing freedom of expression, which was evident from the recent closure of noted news channels.

Along with Islamabad, in Multan also, the workers of Daily Jang, Geo News and The News, traders and civil society activists on Monday staged a demonstration on Nusrat Road against the arrest of MSR and demanded his immediate release.

The protest camp had been set up outside the offices of Daily Jang, The News and Geo in the Khyber Super Market.

Protesters vowed to continue their protest till the release of MSR and withdrawal of cases filed against him.