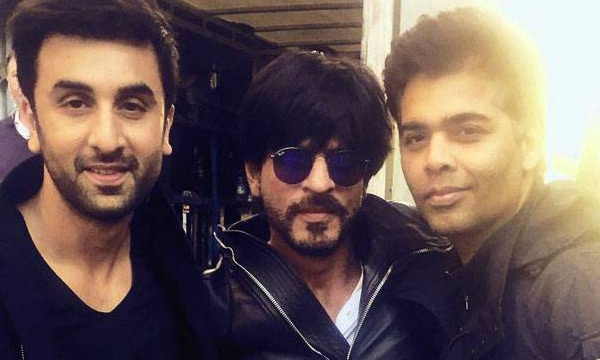 Ae Dil has Muhskil’s director Karan johar already gave us a hint that his best friend Shahrukh Khan will be featured in his upcoming movie ‘Ae Dil Hai Muhskil‘.  With the trailer hitting the internet today, people have gone crazy and excited for the most anticipated movie.

Guess what the news of SRK playing Cameo in Ae Dil hai Mushkil might be true. The Duo, Karan Johar and SRK dates back to DDLJ times and since then KJ and SRK have given us some amazing movies that melted our hearts.

SRK being part of the movie was true but SRK in the trailer too? Yes, you read that right! ADHM’s trailer hit the Internet today and since then the news of SRK being the part of the trailer has taken the internet by storm.  At exactly 1 minute and 40 seconds, Ranbir Kapoor is shown narrating an emotional dialogue with a man who’s back is to the camera.  Now, this man is said to be Shahrukh Khan who will be featured in ADHM.

While fans are busy playing the guessing game, here is the screenshot from the trailer that people are talking about :

We bet if you are die-hard SRK fan then you can easily recognize that either it’s him or not!

Fans are already going super excited with Ae Dil Hai Mushkil’s trailor released today. We hope the movie that is set to be released on 28th of October makes it bigger to the blockbuster!