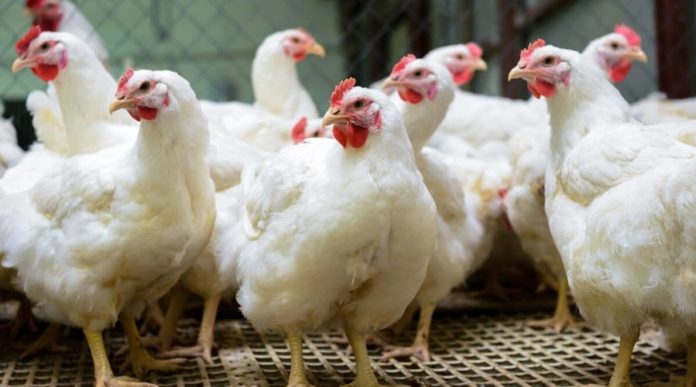 In the last 24 hours, a news has gone viral on different social media forums that appears to be a notification sent that says that the government of Punjab has banned poultry consumption and production due to the fact that coronavirus has been found in chicken.
This news later started making its way to the top TV Channels as their top story and creating a havoc in the markets where the price of chicken meat dropped massively.

However, the Pakistan Poultry Association (PPA), the Punjab government’s Specialized Healthcare and Medical Education Department (SHC&ME), and the spokesperson of the University of Veterinary and Animal Sciences (UVAS) have all termed such reports as fake and false.

“Coronavirus has not been reported in any chicken product in any part of the country. Besides, poultry has not been reported to be linked with transmission of the virus to humans in any part of the world. All the rumours being spread or circulated on social media in this regard are absolutely wrong and baseless,” the association’s northern region vice chairman, Chaudhry Fargham, told journalists during a press conference here on Wednesday.

Deputy commissioner Islamabad, Hamza Shafqaat, among other government officials, came up to deny the news.

This notification is fake pic.twitter.com/csvbHHqnze

The PPA’s vice-chairperson for the Northern region, Chaudhry Muhammad Fargham, spoke up against the notification, calling it baseless propaganda against the poultry products.

“There is no department in Government of Punjab with the name of Health Department. There is either Primary and Secondary Healthcare Department (P&SHD) or Specialized Healthcare and Medical Education Department (SHC&ME),” the secretary of the Punjab government’s SHC&ME Department, Nabeel A Awan clarified.

“Before joining this department, I was Secretary Livestock. I checked it from there too. Do not worry. It’s fake,” he confirmed. 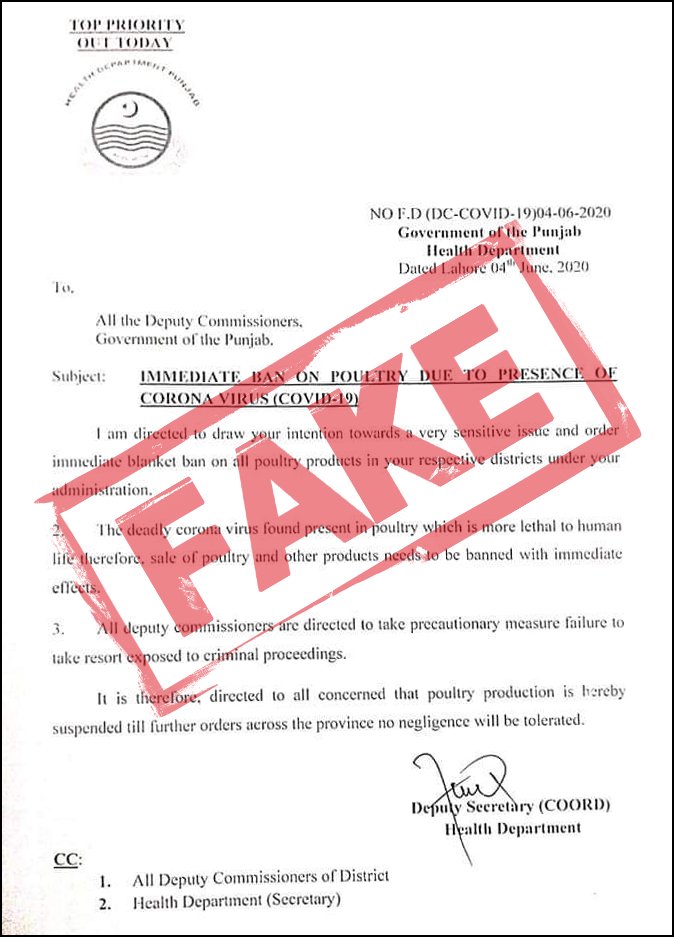 UVAS spokesperson Prof Dr Tahir Yaqoob stressed that coronavirus was fundamentally not a virus of poultry.

“There is no evidence that it is transmitted to poultry. So there is no question of transmission of coronavirus to humans from poultry,” Dr Yaqoob said.

The PPA official informed that a large number of health associations and nutrition experts “have recommended to use poultry products without any fear as it is absolutely safe, having high quality of animal proteins as present in fish, milk and eggs”.

The panic stricken situation though clarified by the officials, has created a fear in the hearts of the consumer in the already pandemic infected country.