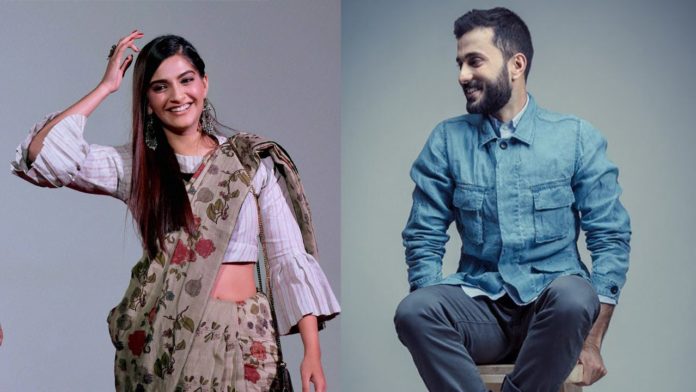 Sonam Kapoor is one of those actresses, who have kept their personal life private. Be it any interview or social media platform, Sonam has never been vocal about what is going in her personal life.

The fashion diva is rumored to be in a relationship with Anand Ahuja, a businessman from Delhi. The rumors rolled in when Sonam Kapoor caught media’s attention by appearing with Anand at a success party of Rustom at AkshayKumar’s place, last month.

Recently, the conversation which took place between Sonam Kapoor and Anand Ahuja under a picture posted by Anand on his Instagram has taken the whole social media by storm. Anand posted a picture on his Instagram account, which he captioned, “50 Bucks? I could take out 25 women to dinner”. The conversation became amusing when Sonam commented, “Which women?” and when Sonam’s BFF Samyukta Nair jumped in, giving Anand an idea to take Sonam out for a date. Check out their funny conversation below:

However, Sonam Kapoor like always will deny and won’t speak out publically about her personal affair. As said in a recent interview, she mentioned, “There are a lot of other things which make you a whole person besides who you’re dating. My personal life is out there because I’ve always been myself but if you’re talking about personal life as in (context of) boyfriend, then I’ll never talk about it.”

Well, other than Sonam’s rumored beau, Anand Ahuja is a businessman, who runs a shoe brand – Bhane!