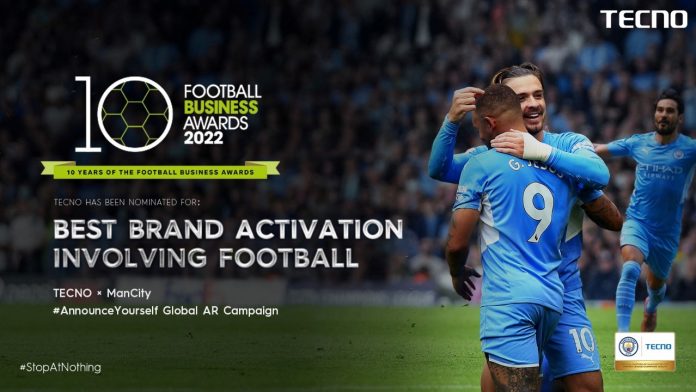 The globally successful smartphone brand, TECNO got shortlisted at the Football Business Awards (FBA) for its #AnnounceYourself Augmented Reality (AR) Campaign for the 2022 Best Brand Activation Involving Football. The #AnnounceYourself campaign was a runaway success catching the eyes of many football executives and professionals all around the world.

Football Business Awards (FBA) is considered the industry’s foremost prestigious accolade. TECNO’s campaign blended the most advanced AR immersive technology, a storied club, and the aspirations of football fans all over the world making #AnnounceYourself attain attention from people around the globe.

FBA celebrates the vital roles businesses and clubs play in shaping the football industry both on and off the field. Through FBA it recognizes outstanding successes such as excellence in football media, marketing efficiency, as well as business and technology innovation.

TECNO, the Global Official Handset Partner of Manchester City, created a Metaverse-like experience for fans to interact with the club set in Man City. From visiting the Etihad Stadium and Man City Football Academy training campus to signing a new contract, selecting their squad number, and mingling with first-team players, this AR experience gave fans a chance to live out their dreams supporting their favorite football club.

Users could also take part in the 3D penalty shootout games before showing off their skills and scores on social media. The AR experience campaign culminated in a grand lucky draw where lucky contestants won rare VIP matchday tickets and travel to a Manchester City home fixture during the season.

This campaign by TECNO received recognition from the judging panel of FBA as it reflects how technology can be integrated into our passions, and utilize platforms such as AR to unite fans and allow them to share common experiences. Moreover, with this AR campaign, TECNO demonstrated the extensive effects of sports marketing and worked to cement the brand’s presence on the global stage.

This campaign also reflects TECNO’s mission as a technology company to bring consumers an innovative brand experience through pioneering technology and some amazing marketing strategies. With the “Stop At Nothing” slogan, TECNO is committed to bringing the best and latest technologies to progressive individuals across global emerging markets, providing elegantly designed intelligent products that inspire consumers to uncover a world of possibilities.

Xiaomi Pakistan is making Eid sweet with some sweet bundle deals and discounts across the entire portfolio!