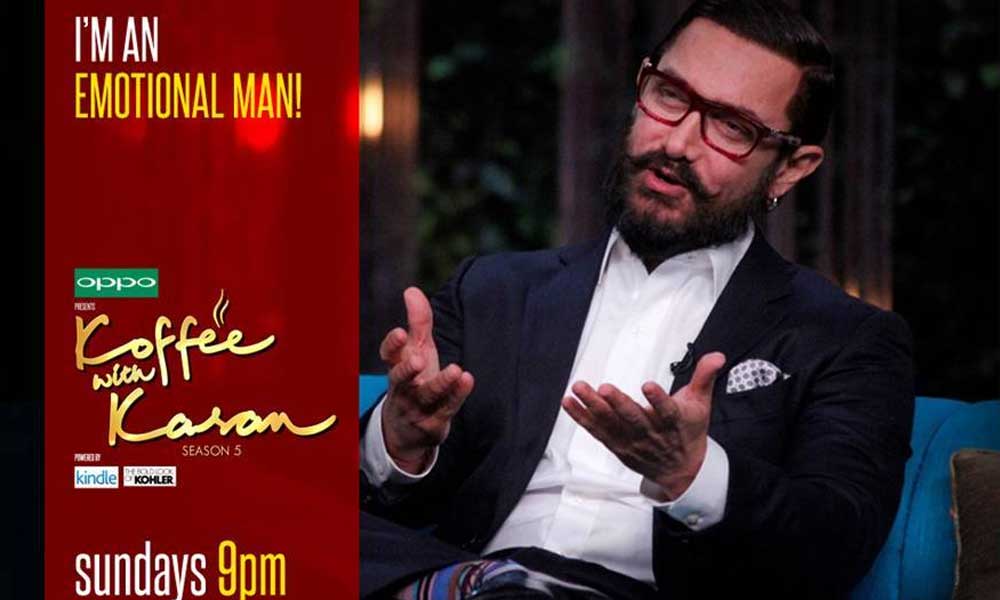 The Mr Perfectionist of Bollywood, Aamir Khan is in the news these days and for all the right reasons. The superstar recently graced the famous Koffee With Karan couch with his Dangal daughters.

Aamir who usually stays away from any controversy and keeps his opinions private was on a roll at the show. With his new haircut and snazzy moustache, the Dangal superstar showed us a new side of his personality to his fans. Here are some amazing revelations about Aamir that he made in the show.

Here are some cure revelations that Aamir Khan made during the show.

He Cried After Watching Dangal Trailer

Aamir is an emotional man and he doesn’t hide it. His soft-heartedness is known to everyone who has watched his TV show Satyamavejate. But do you know, the soft-hearted Khan actually got all misty eyed on the day Dangal trailer was released!

Aamir Calls Actors at Wrong Hours When He Is Nervous

The Mr.pefectionist isn’t easy on his costars. In one of the candid moments he confessed that said he calls up random actors at 5: 30 am in the morning! He admits he gets nervous before his film but more than that, the anxiety level is so high that he doesn’t get any sleep until he sees the reaction to his movie.

Bollywood’s Jagguu Dada comes to Aamir’s rescue whenever he is nervous or sad. The two superstars live in the same building.

Aamir Would Love to Take Advice from Akshay & Salman

When Karan asked him what would he do if wants advice from his co-stars like Salman, Shah Rukh and Akshay? About SRK he said he, “He doesn’t need my advice coz he’s doing fine without my advice and we all love him.”

When asked about Salman. He was like “actually I should take advice him from on the way he thinks, but it always works.” Finally, when he had to say about Akshay, Aamir concluded saying, “I’ll take financial advice from him coz he’s good with numbers.”

Aamir Khan would date every actress if was single

Aamir has always been girl’s favourite and when asked about girls around him. Karan asked him who would he pick as his date if given a choice between Priyanka Chopra, Deepika Padukone, Kangana Ranaut. Aamir crankily ends up saying, “All are so beautiful, I will date all of them had I been single.” He answered with a quick bit of gentlemanliness.

Aamir Khan  was rather honest than quick in the quick rapid fire round where Aamir just had to say yes or no. Rather making some rather daring choices. He said no to Politics and Hollywood in a very reinforcing way. He willingly nodded a big yes when Karan asked him if he would accept a film with Shah Rukh.

Anyway, in the end, we finally got to know that Aamir barely knows anything beyond his own films. While his Dangal daughters Fatima and Sanya were updated with almost all the steps. Guess that might help him getting more focused in his work, not watching any of his competitions.