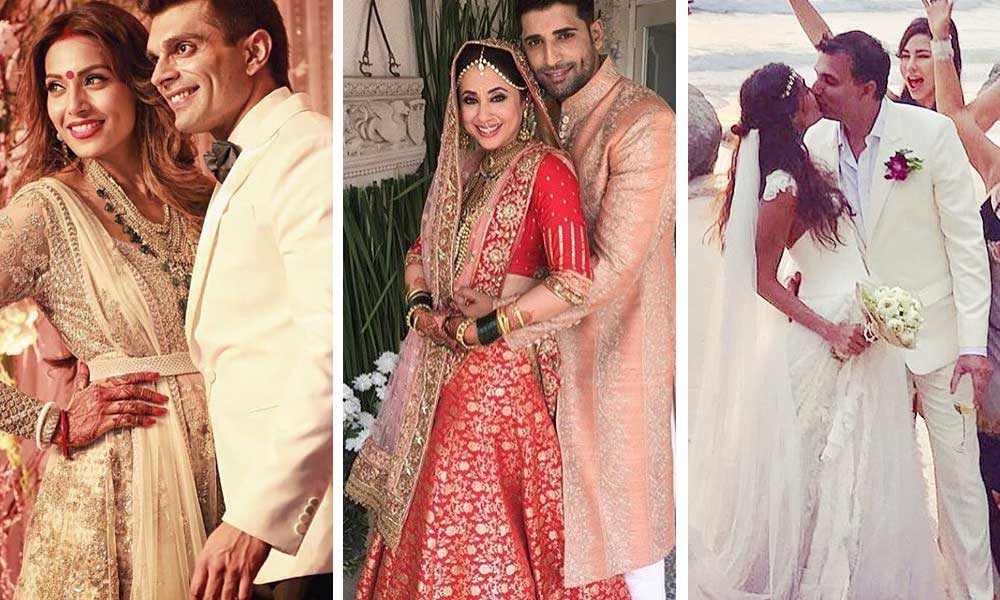 The year 2016 was a mixed blessing for India’s entertainment industry. While many Bollywood couples decided to part ways, others decided to make their relationship official with grand wedding ceremonies that took over our Instagram feeds. While some celebrities kept their marriages under tight wraps others made sure to flaunt minute details with their fans.

In case you’ve forgotten who got married to whom during the year, here is a rundown on India’s grandest celebrity weddings of 2016

One of the most talked about weddings of the town was of Bipasha Basu and Karan Singh Grover. They tied the knot on April 30 and were ‘Alone’ no more. The stars wedding was a huge affair with 4 star-studded events.

Asin finally got married to her super rich boyfriend, Rahul Sharma on January 2016 in a grand wedding attended by whos and whos of Bollywood. The wedding marked an amazing start to the year!

Bollywood’s original blond beauty, Urmila Matondkar quietly got hitched to model Mohsin Akhtar Mir in front of really close friends and family in Mumbai. Hers was a really low-key wedding.

TV star Divyanka Tripathi got married to Vivek Dahiya on July 8 in the most dream-like way that you’ll keep seeing the pictures again and again. The wedding was extremely star-studded.

The cuteness of Bollywood finally got her relationship status changed on 29th February. Goodenough was her guy. Theirs was a full-on starry wedding.

Bollywood’s newbie Sexy Diva Lisa Haydon had a secret beach wedding in Thailand with her Pakistani-British beau Dino Lalvani on October 29. They had dated for over a year before settling down. Though a small, but beach weddings are always magical.

The premier league star Yuvraj Singh got married to Hazel Keech. Perhaps it was one of the cutest wedding of this year. However, the two lovebirds had not one but two weddings, two receptions and a gala dinner in Goa.

Kishwer Merchant and Suyyash Rai‘s marriage took place on December 16. The wedding was a full on a telly affair.

Another hottie went off the market as Lee Elton tied the knot with Arunoday Singh on December 14 and the wedding was every bit traditional. Though we’re a bit heartbroken that he’s now taken. Though the couple looked dashing together.

After dating for seven years. Sanaya Irani and Mohit Sehgal got married on January 25, Their fans were just too damn happy. Of course they were happy too!

These were the top most 10 weddings of 2016! Let us know which one is your favorite in the comments below!