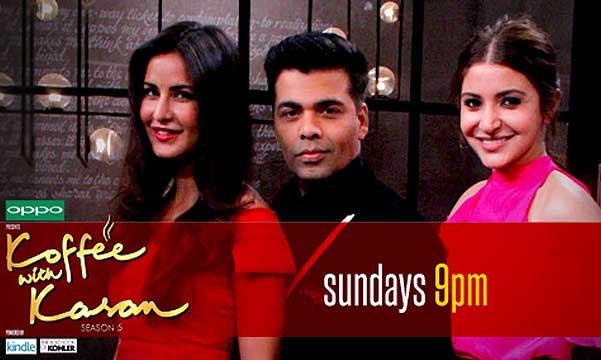 The two Jab Tak Hai Jahan leads actresses, Katrina Kaif and Anushka Sharma are all set to reunite at Koffee With Karan’s season 5 next episode. Judging from Katrina Kaif’s statement, “Anushka Sharma and I have always seemed to have fun on couches together,” the episode will be a blast.

Unlike other Bollywood divas, the two celebs will reunite and are looking forward to spending share some giggles on the couch.  The Sultan actress commented on Kat’s picture saying, “Hahaha true! And there is more in store for you guys soon.. hint: Koffee”.

There were a lot of rumors about Katrina Kaif’s appearance on Koffee With Karan. While some thought she would appear with Salman Khan or Hrithik Roshan it was actually Anushka Sharma who won the seat beside this hottie.  who she will be appearing with. Looking at the likes of Hrithik Roshan he was the favorite. However, it was later confirmed that Anushka Sharma will join her on the show and the two ladies will be a bomb on the couch of Koffee With Karan. We all know there is a lot that can be asked to Katrina Kaif on the show. Karan will definitely ask her questions about Ranbir. Salman called her clueless in his episode on the show which could be one of the questions that the host might ask her.

The show’s teaser show Karan grilling Katrina Kaif over her past relationship with Salman Khan.

We have to say Katrina looks very beautiful in that red dress. While Anushka looks a bit of a modernized girl in pink top and black bottoms. Arjun Kapoor is gaining a lot of popularity here as he is back again for a guest appearance. The teaser looks very funny. Let’s see when the episode comes up!