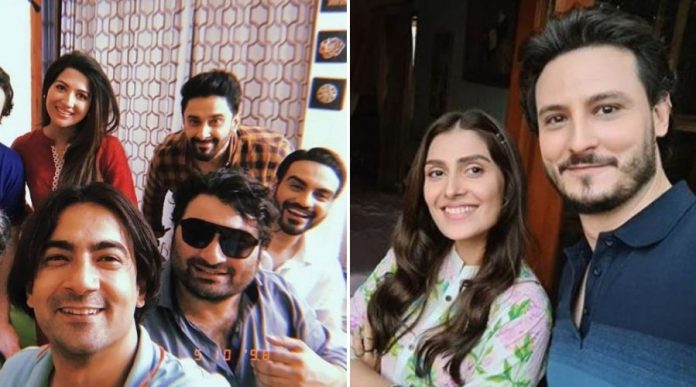 Ayeza Khan after having an amazing back-to-back dramas throughout 2019 and 2020, is coming with yet another drama, Chupky Chupky, with the talented Osman Khalid Butt.
Osman Khalid Butt shared a picture alongside Ayeza Khan, sending the fans into frenzy.

Both the actors have come together for a Ramadan transmission 2021. Previously they both worked together in Ramazan special comedy-drama Galti Se Mistake Ho Gayi in 2013.

Fans have speculated that Osman Khalid Butt captioned his image “Reunited” due the fact also that due to corona virus spread, the shooting of the play had been halted.

And good news for all the fans is coming this Ramadan as the famed “Pindi Boy” Arslan Naseer of Comics by Arslan (CBA) is all set to make his TV debut. Hailed for his artistic work and impeccable comic timing, Arslan has been a favourite of many Pakistanis since 2011.

In an interview, Arslan revealed of how he landed the opportunity, “I have been part of the corporate sector for many years and was seriously thinking of taking my YouTube career full time,” he began to share, adding that this isn’t the first time he got an offer from the TV industry. “But I suppose this came at the right moment as I was about to take the leap of faith and was planning on quitting my day job.

Though it happened all of a sudden, God has been kind and the timing was right.”

The story is of a two families who are related and are also each other’s neighbors, having grandmas who were part of a polygamous marriage, “Both the ladies have a never-ending beef but their grandchildren think otherwise.

It’s a love-hate relationship of one big family that is filled with occasional jealousy, friendship, love and lots of laughter,” he explained, revealing that he is playing the eldest son in one of the families and is best friends with the eldest son of the other family played by Osman Khalid Butt.

Written by the Suno Chanda fame writer Saima Akram Chaudhry and directed by Danish Nawaz, the drama was expected to go on-air in April this year. The project, however, couldn’t be finished due to the lockdown.