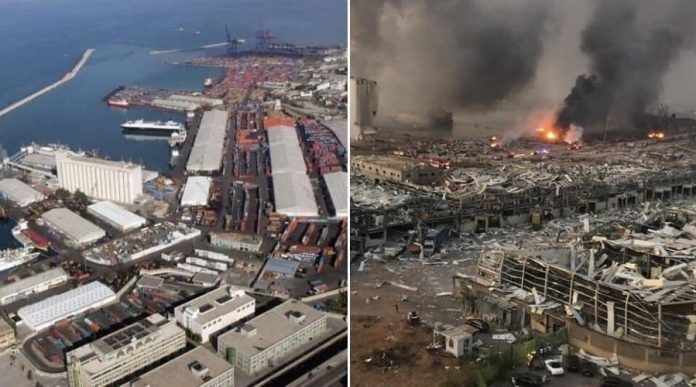 The world remains in shock after Beirut, the Lebanese Capital, experienced one of the biggest bomb blasts in its history on the central port killing 78 people and some 4,000 wounded. People of Pakistan are also mourning the loss of such magnitude and the hashtag #PrayingForBeirut has started trending in the country.

People are constantly sharing the images of the beautiful port of Beirut that has now turned into a pile of rubble.

Can't believe that in the middle of this pandemic ,people in Lebanon is now facing another disaster. Sending prayers and deepest condolences to our dear Lebanese brothers and sisters. May God always guide you.#PrayForLebanon pic.twitter.com/ovGuJQ8K47

This is Beirut, Lebanon. Few hours before & after the #explosion. Knowing it took years to build the city just to be destroyed within seconds, really really broke my heart 💔

The explosion on Tuesday sent shockwaves across the city, though the cause of the explosion was not immediately clear.

People are praying for their fellow Muslim brothers and sisters.

no words cant express how saddening is the situation happening right now. praying for your safety and the healing of everyone. we stand with you, beirut, lebanon.#PrayForLebanon pic.twitter.com/6hAWzs5FoW

Health Minister Hassan Hamad had earlier reported at least 70 deaths, according to an official with the Lebanese Red Cross, George Kettaneh, who also warned that the death toll could rise further.

Officials linked the explosion to some 2,700 tonnes of confiscated ammonium nitrate that were being stored in a warehouse at the port for six years.

An estimated 2,750 tons of the explosive ammonium nitrate had been stored at a warehouse in Beirut for six years. Bomb blast by explosion of ammonium nitrate.#PrayForLebanon #Beirut pic.twitter.com/bnzOMeJhnw

President Michel Aoun called for an emergency cabinet meeting on Wednesday and said a two-week state of emergency should be declared.

US President Donald Trump said the huge explosion that shook Beirut appeared to be a “terrible attack.”

“We have a very good relationship with the people of Lebanon and we will be there to help. It looks like a terrible attack,” Trump told reporters at the White House.

“I’ve met with some of our great generals and they just seem to feel that this was not some kind of manufacturing explosion type of an event … They seem to think it was an attack. It was a bomb of some kind.”

This claim by Trump gives a new color to the terrible situation already going on.
Celebrities and big names in politics also expressed grief over the attack.

Terribly tragic scenes from #Beirut. Pakistan’s prayers and thoughts are with the government and people of #Lebanon in this difficult time.

My heart goes out to you Beirut! 💔
Heartiest prayers for all those who have been affected by this tragic blast. Such a beautiful country going through the worst of times! 🥺#Beirut #Lebanon

#Beirut Ya Allah have mercy… Prayers for Lebanon. Way too tragic and heartbreaking. 🇱🇧

– heart goes out for the people in #Beruit I am praying for a speedy recovery. 💔

My heart goes out to the people of #Beirut. Can't even imagine what they might be going through after the horrific explosion that too in the midst of a pandemic.Praying for all those affected. #BeirutBlast #PrayersForLebanon

Prime Minister Imran Khan also tweeted his deepest condolences and lent his support in spirit to the people in Beirut.

Deeply pained to hear of the massive explosions in Beirut with precious lives lost & thousand injured.We stand in solidarity with our Lebanese brethren in their difficult hour, sharing their sorrow & grief. May Allah grant speedy recovery to the injured & strength to the bereaved

Shocking. Terrifying. I’m speechless. Deepest condolences to everyone caught up with this unfurling disaster in Lebanon. 🇱🇧

This tragedy comes amidst the widespread pandemic, Lebanon has recorded more than 5,000 cases of the virus, including 65 deaths, according to Johns Hopkins University.