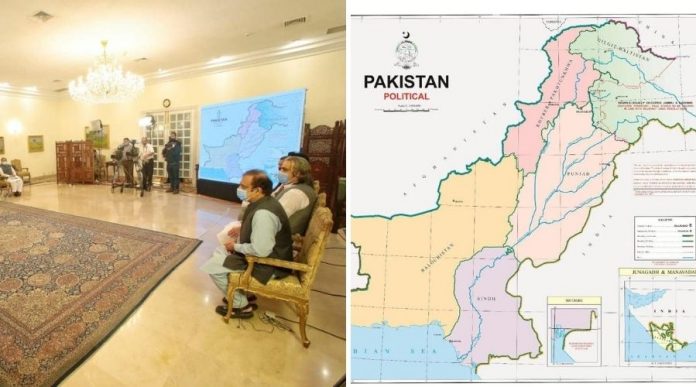 Prime Minister Imran Khan and the federal cabinet disclosed a “new political map” of Pakistan on Tuesday, in which Indian Illegally Occupied Jammu and Kashmir (IIOJ&K) has also been included as part of Pakistan for the first time ever in history.

Furthermore, the new political map also shows Kashmir and Ladakh, the erstwhile state of Junagadh in Indian Gujarat as part of the country’s domain.

This act by Imran Khan comes only a day before Youm-e-Istehsal, which is going to complete its first anniversary. It is the day on which India began their demographic apartheid in IIOJK. Indians divided the IIOJK into three parts and placed their army to completely siege the territory, forcing the civilians to remain in their homes since then.

Addressing the nation in company with Foreign Minister Shah Mehmood Qureshi on state television, the premier stated that the federal cabinet has approved the new political map and from now on it will be the ‘official map’.

Moreover, Imran Khan said that the new map will also be included in the syllabus of educational institutes all across Pakistan.

The map clearly shows that IIOJK is a “disputed land” and states that the final decision regarding the land will be made with suitable United Nations Security Council (UNSC) resolutions.

The prime minister vowed that Pakistan would continue its political struggle for the Kashmiri’s saying that:

“We strongly believe that Kashmir conflict can only be sorted out through ‘politics’ and We do not think that arms and forces are the solutions in this case” he added.

“We Pakistani’s have always deemed Kashmir as a part of our own country and the new map is the first step in the direction of achieving our goal,” said PM Imran Khan.

He added by saying, all political parties of Pakistan were in support of this new map, Also, “The new map go against the Indian government’s illegal act last year on August 5.”