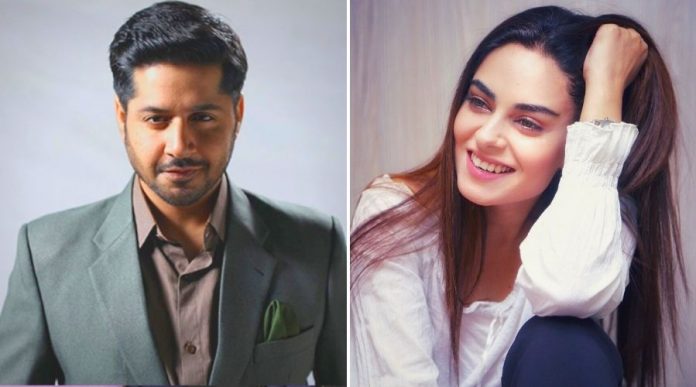 Imran Ashraf has been making strides in the Pakistani Drama Industry for years, but especially after his portrayal of “Bhola” in the hit drama serial “Ranjha Ranjha Kardi”, and now he is receiving acclaim for his writing and acting in the drama serial “Mushk”. Imran Ashraf is nowhere nearly done as he is set to make his acting debut in films with “Dum Mastum” and him in lead.

Actress Ammar Khan will be in the lead with Imran Ashraf. She has proved her acting chops in projects like “Dil e Gumshuda” as Alizey.

The movie will be directed by Mohammad Ehteshamuddin – who made his big-screen directorial debut with Superstar earlier this year.

Written by Amar Khan, Dum Mastam will be produced by Adnan Siddiqui and Akhtar Hasnain under Cereal Entertainment.

The movie will also introduce Momin Saqib, as a supporting cast, who is an Instagram sensation while the movie also stars Adnan Shah Tipu, Saleem Mairaj, and Sohail Ahmed.
Adnan Siddiqui, the veteran actor and the producer of ‘Dum Mastam’ took Instagram to announce the film.

According to the writer and one of the main leads Amar Khan, ‘Dum Mastam’ is a romantic comedy film.

Amar Khan had shared, “It (Dum Mastam) is a Punjab-centric rom-com, but not based in rural Punjab; it is a very rooted, indigenized story of interior Lahore. It is set in the underbelly of the city.”

“It’s a romantic comedy helmed by the maverick director Ehtashamuddin who directed Superstar recently…We’re also introducing Momin Saqib, who is one of the supporting cast in the film, who’s an Instagram sensation and is phenomenal with his comic timings,” Adnan Siddiqui shared, adding that he will reveal more update soon.

Recently Kiran Malik announced that she will be starring in an “Item Number” in the film, which will be composed and sung by Bilal Saeed.

The movie is already in the shooting phase and is all set to release by the end of 2020.

Nizam-e-Alam: New Turkish Web Series to come by the creators of ‘Ertugrul Ghazi’