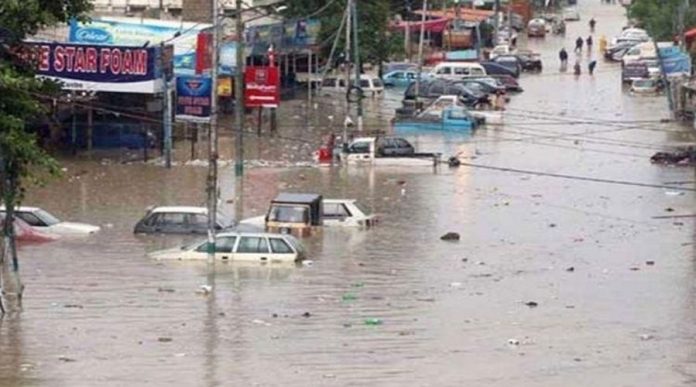 Karachi has seen one of the heaviest downpour on Saturday which resulted in chaos for the citizens as well as the authorities. But the monsoon is still not over as the MET office has forecast monsoon rainfall in Karachi and parts of Sindh till Tuesday.

“Mainly hot and humid weather is expected in most parts of the province,” the PMD said on its website. “However, rain, wind and thunderstorm are expected in Karachi, Thatta and Badin.”

A monsoon low persists over eastern Sindh with another low-pressure area prevailing over central India. Under influence of these systems widespread rain/thundershowers with a few heavy to very heavy falls are likely to occur in Tharparkar, Badin, Mirpur Khas, Umerkot, Thatta, Sanghar, Hyderabad and Karachi districts, and almost all the places in rest of Sindh till 25th August, according to the PMD forecast.

This spell in combination with the heavy rain spells before, the city has not been able to restore its roads or infrastructure that has been damaged badly due to it.

At least three people died Friday after getting struck by lightning as various parts of Sindh — including Karachi, Hyderabad, and Thatta.

In Karachi, multiple areas were submerged with water entering residential properties and disrupting the life of the citizens.

People across the city are blaming the bad administration of the city for the losses and inconvenience people have to face.

People have been chivalrous in these difficult circumstances.

Salute to Food panda Riders
They make delivery possible in worst weather condition and now they are also serving the act of humanity ..#KarachiRain #KarachiRain pic.twitter.com/OXezOL7BCD

Recreating some terrible events, people are also having fun on twitter.

This is the height of carelessness and irresponsibility.🤦
😁😁😁😁#Karachi #KarachiRain pic.twitter.com/4AEZTXcDNR

Pak Army and Rangers joint rescue operation after #KarachiRain.
No #politician came & asked them to go back to #barracks.#ThePakistan #KarachiRains pic.twitter.com/8GczqgtZ8O

According to the Pakistan Meteorological Department (PMD), Surjani Town received the highest rainfall at 170 millimeters (mm).