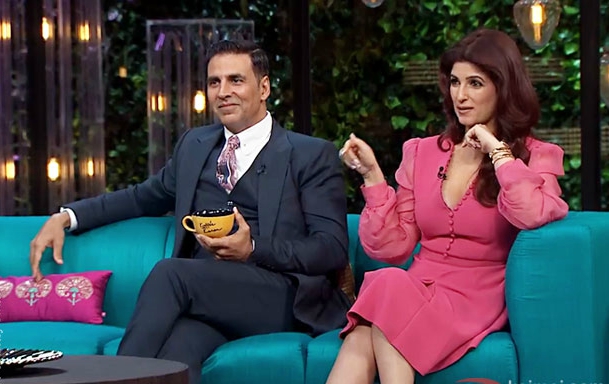 While the most happening and popular show, Koffee with Karan 2016  is already gaining a lot of eyeballs since its release, we have Twinkle Khanna who has taken the internet by storm with her NSWF comments on Koffee with Karan Season 5.

Hold on! there’s something more to the news as Twinkle Khanna Tells Karan Johar to keep his eyes off Akshay Kumar’s crotch.

The season 5 of Koffee with Karan is surely going to be loaded with loads of fun, entertainments, dirty secrets and of course the famous celebrities.  The preview of the second episode already revealed what;s going to be there on the sets. Twinkle Khanna aka Mrs.Funnybones will leave Akshay and Karan filled with laughter through her sharp and quick-witted comments.

Twinkle Khanna aka Mrs.Funnybones will leave Akshay and Karan filled with laughter through her sharp and quick-witted comments.

In episode 2 of Koffee with Karan Season 5, the two best friends Karan and Twinkle will meet each other where twinkle will be accompanied by her beau , our very own Khiladi Akshay Kumar. the teaser of the upcoming episode is surely a blast and have already created much excited among fans as twinkle is seen spicing up the show. When Karan asks Twinkle about the one thing that Akshay has and other Khans don’t, to much surprise she replies

When Karan asks Twinkle about the one thing that Akshay has and other Khans don’t, to much surprise she replies “Some extra inches” and later with her great sense of humour she points Karan to not to look at Akshay’s crotch as it is his feet she was talking about.

Watch the teaser below:

Being quirky, twinkle is known to take a dig at anybody and this time it was her best friend Karan Johar who became the victim. When she was asked about the titled of a book on Bollywood, she replied “Tentacles to Testicles”, OMG she isn’t the same Twinkle  that we usually see on social media? During all this conversation, Hubby Akshay Kumar goes silent as his wife makes it toe the spotlight.

The actor-turned-entrepreneur was on fire as she turns the table on Karan and bombarded Karan with the rapid fire questions instead. Asking about why did the Planet Pluto drop to knowing about Defence Minister of the country- Twinkle even mentioned that she is the only women that Karan has ever fallen in love with.

Karan to Twinkle’s comments acknowledges and says he has dug his own grave by inviting her on the show.

The Khiladi actor was able to gain momentum during the quiz round and not only did he sing for his lady love but also slow dances with her on the sets. Twinkle has surely gotten a gem of a person as her husband.