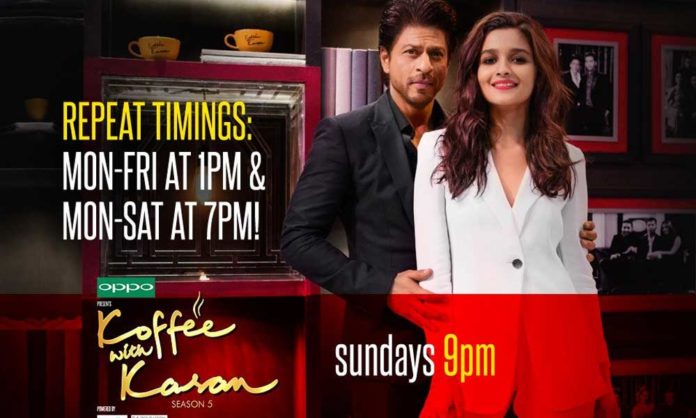 Koffee with Karan made a return to TV screens last night with two superstars flanking the premiere.  With Karan Johar as the catty host, the first episode saw Shah Rukh Khan and Alia Bhatt as the first guests.

Dive in to know all the shocking revelations and candid confessions.

Karan kicked off the show by asking Shah Rukh Khan about his absence from the show’s last season which made headlines due to the immensely close relationship that SRK and Karan share. Though he gave a very diplomatic answer citing ups and downs that relationships face, things soon took another turn.

Khan talked about his and Karan’s relationship even going as far as to ask Karan to leak their nudes to let the world know of their love.

As always , the rapid fire round didn’t fail to disappoint as confessions came tumbling out. SRK proclaimed that he would love to have Alia as his co-star in a Hindi version of 50 shades. While Alia confessed that she would love to follow Kangana Ranaut around to see where she goes. But by far, the most hilarious moment of the night was when KJO asked SRK what he would do if he woke up in Ranveer Singh’s body.

The actor’s cheeky answer that he would ask Ranveer where he got his padded underwear from, left both KJO and Alia Bhatt in fits of laughter.

Needless to say , Shah Rukh won the hamper for the fifth time and this time he dedicated it to his daughter Suhana Khan.

While Shah Rukh is extremely impressed with Alia, he stated that she is too good “too soon” and instead of getting into just being a great actor, she should experience everything that the industry has to offer.

He said he loves Alia’s relentless attitude and the way she is emotional about her work but she should also get detached. In fact, he had a term for it too, demotional (Detached + Emotional).

Th first episode raised the bar quite high , and audiences are excitingly waiting for their Sundays to get more interesting again.