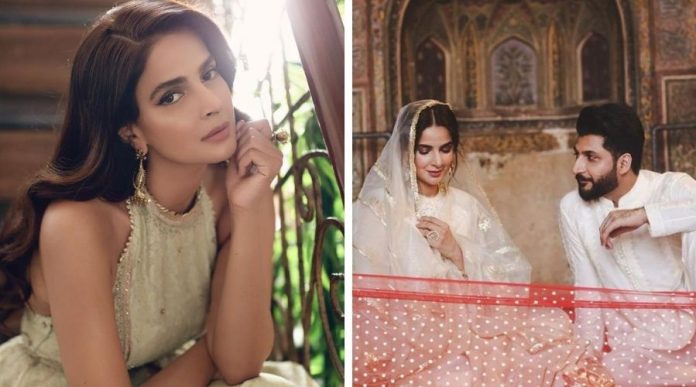 A recent post by Saba Qamar left millions of her fans dazed and confused after she simply captioned it as “Qubool Hai”, turns out to be a directorial debut for Saba Qamar for the latest, upcoming music video by Bilal Saeed.

Her followers had started congratulating the star on her marriage to Bilal Saeed but it was later cleared up in the comments that Bilal Saeed is already happily married and has a child.

Later, Saba confirmed in her Instagram story that she would be working with Bilal Saeed as director.

She wrote, “We’ve a new director in town! A little surprise for all of you coming very soon. Directed by @sabaqamarzaman.”

The video has been Written, Composed and Produced by the award winning singer, Bilal Saeed.

Saba Qamar is seen wearing a beautiful gold traditional ensemble by Mohsin Naveed Ranjha whereas Bilal Saeed is sporting Kurta Pajama with waistcoat and a beautiful masjid is seen in the background as the leads of the video hold hands in the first look revealed.

The date for the release of the song has not yet been revealed and the only information that we do have is, it is “Coming Soon”.