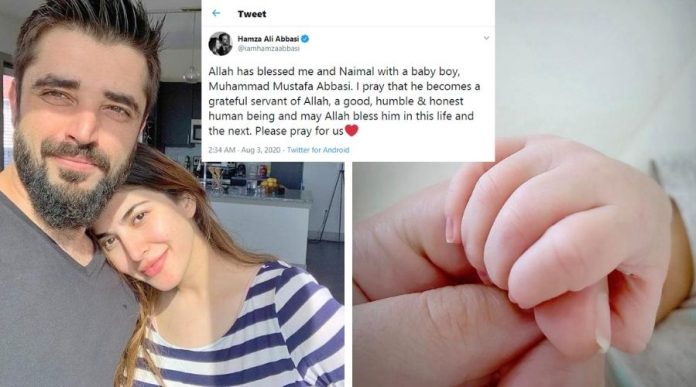 The power couple of Pakistan, actors Hamza Ali Abbasi and Naimal Khawar have welcomed a baby boy as revealed by the new father in a social media post.

“Allah has blessed me and Naimal with a baby boy, Muhammad Mustafa Abbasi. I pray that he becomes a grateful servant of Allah, a good, humble & honest human being and may Allah bless him in this life and the next. Please pray for us.”

Naimal also shared a picture of the child holding her hand on Instagram, she wrote, “The most pure form of love”.

Hamza Ali Abbasi and Naimal Khawar had been courting away from the tabloids for some time and finally tied the knot last year in a small and beautiful ceremony in Islamabad.

Naimal Khawar made her debut with the Mahira Khan starrer “Verna” and instantly made it big in the Entertainment Industry. Occupying the number one spot as the most googled person in 2019 was the incredibly talented painted and actress Naimal Khawar. With her drama serial on Hum TV hitting highest viewership coinciding with her marriage to the very popular and controversial Hamza Ali Abbasi, Naimal Khawar became viral in Pakistan.

And now as the quarantine hit, Naimal Khawar has again caught the attention of thousands by documenting via Instagram her routine during the lockdown.