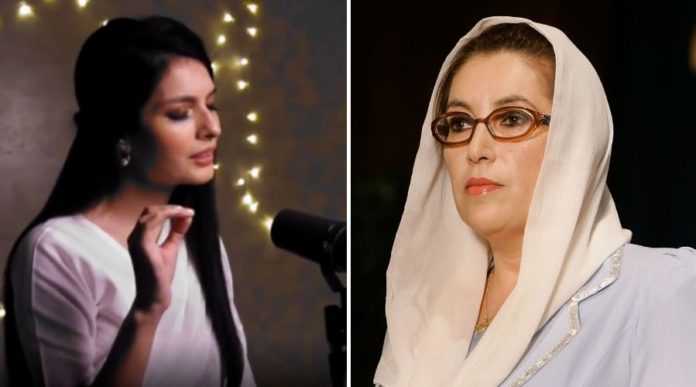 Yesterday marked the 67th birthday of the legendary political figure and powerhouse Benazir Bhutto. And on this occasion, Model and Actress Saeeda Imtiaz released a tribute to the ex-Prime Minister of Pakistan titled as “Woh Larki Benazir Thi”.

The Kashmiri-American Model released the tribute song on her Instagram handle:

Earlier she said on her Instagram: “We have been staying Productive yet safe during Covid.This was shot with limited people as we followed SOPs. We made an effort n hope you all like it. #WohLarkiBenazirThi🇱🇾 #ReleasingSoon”

The song chronicles the journey of this amazing woman and hero who strove to make her country a great place and lost the battle in the end, yet won all the hearts. In the soulful voice of Saeeda Imtiaz, the emotions the country feels for the martyred hero are beautifully captured.

The song has been directed by Omar, lyrics have been penned by Zohaib Butt and music is done by Raga Boyz Band along with Wali Hamid Ali Khan.

Saeeda Imtiaz is a kashmiri American actress and supermodel. Imtiaz has worked in an upcoming film Kaptaan: The Making of a Legend, a film on the life of Pakistani politician and former cricketer Imran Khan.