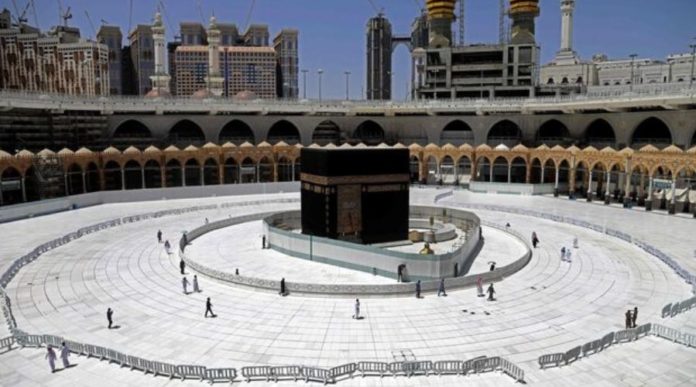 With Hajj 2020 being in the danger of being cancelled due to widespread coronavirus, but Saudi Arabia confirmed that Hajj pilgrimage will be held this year. Though the Kingdom also announced that only a limited number of people will be allowed to perform Hajj this year.

Previously Saudi Arabia asked Muslims in March to put their Hajj plans on hold and suspended Umrah until further notice.

Hajj will be conducted starting next month but only Saudis and expatriate residents from various nationalities are allowed to perform the Haj rituals this year, as a precautionary measure to avoid crowds and stem the spread of the coronavirus pandemic.

The ministry said the decision had been made “in light of continuation of the pandemic and the risks of Coronavirus spreading in crowded spaces and large gatherings.” The statement said: “A very limited number of pilgrims from various nationalities who already reside in Saudi Arabia, would be able to perform it.

#Statement issued by the Ministry of Hajj and Umrah regarding Hajj of 2020 pic.twitter.com/UGCShFZw1n

Rules To Be Followed:

Very limited number of pilgrims and in compliance with precautionary measures, some of which include:

Ban on older pilgrims has been placed

Extensive and additional health checks will be made

Countries backing off of Hajj:

UAE: The UAE Hajj Affairs Office (HAO) announced on Monday that it will not participate in this year’s Haj, following Saudi Arabia’s decision to limit the Muslim pilgrimage to pilgrims who already reside the Kingdom.

“The Kingdom’s decision stems from the preventive and precautionary measures taken to contain the spread of the pandemic and to keep all humans protected and safe from its risks and in accordance with the teachings of Islam in preserving the lives,” the HAO said in a statement.

The HAO made the announcement after consulting and coordinating with the Saudi Ministry of Haj and Umrah.

According to Bangladesh’s Religious Affairs Ministry, the country was supposed to send 137,198 pilgrims to Saudi Arabia to perform Hajj this year. However, under the circumstances surrounding the pandemic, only 64,594 people have registered.

Of the six countries that opted not to take part in this year’s Hajj, three Muslim-majority countries are Indonesia, the world’s largest Muslim country, Malaysia and Brunei.

Indonesia was supposed to send over 220,000 pilgrims, Malaysia 36,000, and Brunei 1,000 this year. The number of the other three countries could not be known.

As yet, the number of COVID-19 cases that have been reported in Saudi Arabia reached 161,005 by adding 3,393 new cases on Monday, according to a statement from the Saudi Health Ministry.