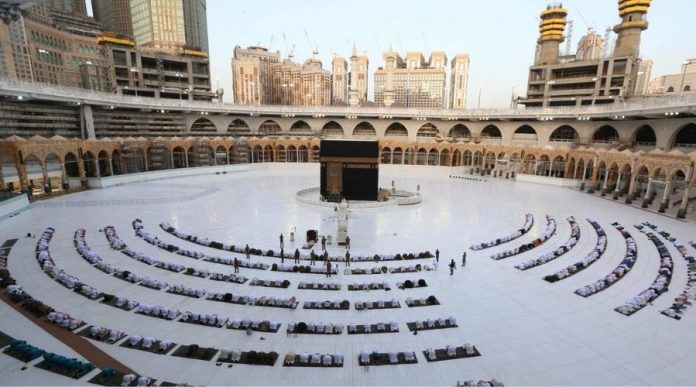 The Saudi Ministry of Interior announced on Tuesday that the country will be allowing pilgrims to perform Umrah in gradual stages, while taking the strict and mandatory precautions.

“An approval was issued to allow the performance of Umrah and to visit the Holy Mosque in #Mecca gradually only to those within the kingdom starting from October 4, 2020, while taking the necessary health precautions,” the ministry said, the National reported.

Umrah will be reopened in four phases, with the first phase starting on October 4 allowing Saudi citizens and residents only to perform the pilgrimage at 30 per cent capacity, or 6,000 pilgrims a day.

“This decision is taken to ensure the Umrah is performed in a safe manner from a public health perspective and in accordance with the teachings of Islam in preserving lives,” he told The National.

The second phase will increase the capacity of the Grand Mosque to 75 percent, which would include 15,000 pilgrims and 40,000 worshippers a day from Oct. 18.

Visitors from outside the kingdom will be permitted from November 1, when Umrah’s capacity will be raised to 20,000 pilgrims per day, the ministry added.

The fourth stage will see the Grand Mosque return to normal, when all the COVID-19 risks have gone away.

The ministry said Saudi Arabia wants to “empower pilgrims, both from inside and outside the Kingdom, to be able to perform “the ritual in a safe and healthy manner,” while protecting them from the threats of the pandemic.”

This means that like Hajj 2020, a strict precautionary measure list will be followed to ensure safety of all.