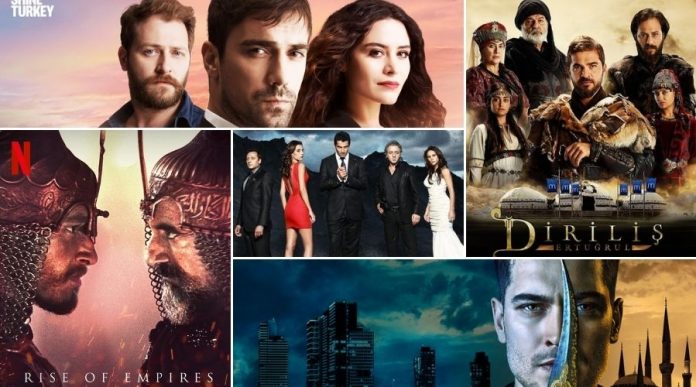 In Pakistan, Bollywood films and Indian dramas were very popular over the years. But due to uncertain relationship between Pakistan and India and ban on Indian films and dramas in Pakistan, Pakistanis have switched towards Turkish dramas for many years.

As their popularity has increased so does their increase in demand. Turkish drama industry has also done a terrific work and have produced quality dramas which are recognised worldwide.

Many Turkish actors have got fame in Pakistan and they happily call Pakistan there second home. Whereas many actors have visited Pakistan and got massive love by the Pakistanis. Some of then have even become brand ambassadors of various well known brands. Other than captivating story-line and plot versatility many Turkish dramas are binge watching on Netflix. We have compiled a list for everyone who admires Turkish dramas!

Prime Minister of Pakistan, Imran Khan recommend Pakistanis to watch Ertugrul this Ramzan. Pakistanis after watching became fan ofthis drama. Ertugrul got more Pakistan than other country of the world. If you haven’t watch it yet it is a must watch!

Rise of Empires: Ottoman is the story of Ottoman Sultan Mehmed II who wages an epic campaign to take the Byzantine capital of Constantinople and shapes the course of history for centuries.

Starring Engin Altan Düzyatan (who also played the role of Ertugrul in Resurrection: Ertugrul) The End is a psychological trailer in which a woman finds out that her whole life was a lie. She finds her way from web of lies and save her husband’s life. This is the first ever Turkish drama which aired on a major West European channel.

Cevdet, a retired commissioner, and his wife spend their pensions in peace on a farm away from the city. Suddenly the life of the family is destroyed by the sudden arrival of a terrible news from the little son.

In a small Turkish town, two young tuberculous poets try to survive while publishing their poems. As they both fall in love, their life would never be the same.

Also known as “Kördügüm,” was a show that was believed to put Turkish drama industry on the maps. The story of the drama circulates around two wealthy businessmen with car obsessions who cross paths with an idealist paediatrician. Love enters the equation, and their lives change for good.

The series features epic adventures of a young shopkeeper who learns that his life is connected to a secret. The Protector is a great season to watch on Netflix.

The Yard is a Turkish remake of US drama series “Orange is New Black.” A women ends up in prison due to a domestic clash and struggles to get out to reunite with his daughter.

Black is also known as “Oyunbozan.” The season starts with journalist who’s been killed, then her brother a psychologist tries to seek revenge for her sister.

In the series Omer is accused by his friend for a series of crimes that he didn’t commit. After getting out from prison Omer get a new identity and seeks revenge.