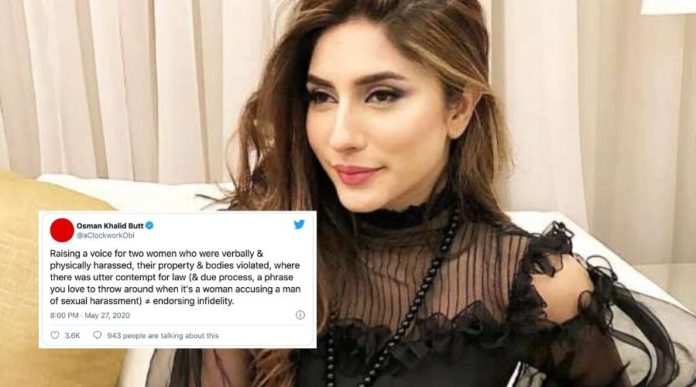 After a recent video had gone viral featuring famed actress Uzma Khan being assaulted by business tycoon Malik Riaz’s daughters, many people have come out and are giving their two cents on the whole debacle.

The content of the video involves assault that goes like this, Amna Usman along with the daughters (Amber Malik & Pashmina Malik) of Malik Riaz, had broken into actress Uzma Khan’s house for questioning the nature of relationship of her relationship with her husband.

Uzma Khan has now launched an official complaint against her assaulters and shared the copy on twitter:

Meanwhile Replying to Malik Riaz, Hassaan Niazi, Uzma Khan’s legal counsel in the case, said, “As usual and like all other matters, you are again lying. Your daughters led the criminal act accompanied with at least a dozen of paid goons. And cut this threatening tone, don’t threat the people of Pakistan with your money and connections. No one is above the law.”

I have officially engaged my legal counsel, who will fight my case and help me through with this legal battle! Please get in touch with @khadijasid751 @HniaziISF for any queries that you may have. pic.twitter.com/I8SIrZGiZj

On the other hand, wife of the adulterer, Amna Usman, also shared her statement via video after she was attacked for her barbaric behavior. She addresses multiple issues in that video, first and foremost is that her husband (who she now has left) is not related to Malik Riaz, also that she had warned Uzma Khan multiple times not to meet her husband and that Uzma Khan is a drug addict and constantly consumes Alcohol.

She also said that she did not barge in Uzma Khan’s home rather her husband’s own second home where the actress had been staying.

Amna Usman accepts that her husband has been doing wrong by having an affair with the model and that she will look into that matter. The real estate behemoth, Malik Riaz himself took to twitter to clarify his position and deny any association with the whole mess.

He said: “I categorically rebut this malicious propaganda associating me with a viral video. Usman is not my nephew. I’m appalled at such below the belt attempt to malign me for something I’m not involved in any capacity. I would also like to inform that I’ll be filing defamation cases against anyone who tries to implicate me wrongfully for such disgraceful incidents.”

I categorically rebut this malicious propaganda associating me with a viral video.Usman is not my nephew.I'm appalled at such below the belt attempt to malign me for something I'm not involved in any capacity. (1/2)

I would also like to inform that I'll be filing defamation cases against anyone who tries to implicate me wrongfully for such disgraceful incidents. (2/2)

Here is what people across social media are saying on this issue after #UzmaKhan has become the most trending in the country today:

The most problematic way women deal with their husbands infidelity is to cast all blame on the other woman while absolving their husband of all moral Obligations.This aggression & indignation should have been directed at the woman’s husband! #UzmaKhan #ٹھیکےدار_کی_بیٹی #MalikRiaz pic.twitter.com/oM4r0y46tY

Tell Me One Thing Please:

Why is everyone jumping on this girl #UzmaKhan only ? Is the man not to be blamed equally ?

Why is a woman called a home wrecker when the man is cheating on his woman and wrecking his home equally.

Why not shame him as well. Why only the woman ?

Famed politicians also weighed in on the situation with their posts on Instagram:

Raising a voice for two women who were verbally & physically harassed, their property & bodies violated, where there was utter contempt for law (& due process, a phrase you love to throw around when it's a woman accusing a man of sexual harassment) ≠ endorsing infidelity.

Regardless of who is wrong or right you cannot break into a private citizen’s house and assault them. You cannot take the law into your hand. When you are cheated upon you have the option of going to court and filing for divorce.

Express tribune initially reported this news, but as soon Malik Riaz family's involvement was revealed, they removed the article. This is how much control he has over our media houses. #MalikRiaz @uzmaaaK
@HniaziISF
#UzmaKhan #ٹھیکےدار_کی_بیٹی pic.twitter.com/o74oR7dWWL

Patriarchy makes women turn on each other. #UzmaKhan is one case, but we see this everyday where women are blamed for tempting other men or 'ruining' their own husbands. Men are treated as innocent fools with no control of their libidos & women are seen as manipulative shrews.

In an interview, Malik Riaz's wife said, my daughters, didn't need any education. We have everything to fulfil our basic needs. So we just married them in a teenage. After this incidentof #UzmaKhan she should realize, everyone needs education. Maybe if she https://t.co/L4PuPKUB3D

With the legal proceedings now underway, the justice system is expected to pass a judgement that will help the one who has been wronged and support the innocent.