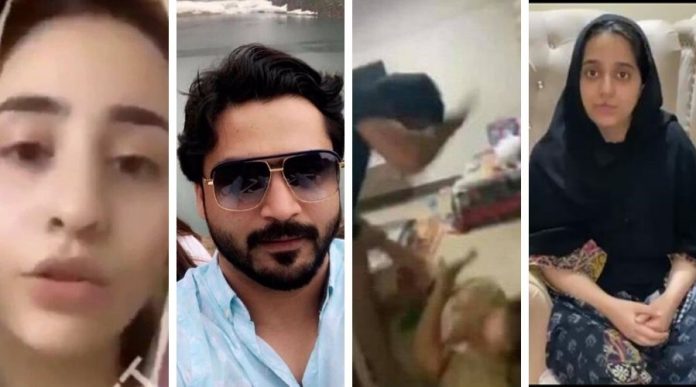 The hashtag Zoobia Meer has been trending on Twitter after the video of his brother beating her and her mother mercilessly made its way to the social media and went viral.
The video shot by the wife of the culprit, Arsalan Qureshi, is about him ruthlessly beating his own mother over some property and cash issue.

Zoobia Meer posted the video online in an attempt to have some justice for the way they are being treated by the man of the family.

Zoobia alleged that her brother not only fled with the property documents but also stole Rs. 400,000 from his mother.

The video is of a monster who raised hands on his mother, Gulnaz Bibi, because of his wife.
Despite launching a complaint with police they were refusing to take action and refused to register a First Information Report.

According to Deputy Commissioner Islamabad, Hamza Sahfqaat, the culprit, ‘is being arrested by Rawalpindi Police’ after he ran away with important documents and cash. The incident took place in Sadiqabad, Rawalpindi.

It's in Pindi. He is being arrested by @RwpPolice https://t.co/84TNkQ5KVX

Rawalpindi Police said in a statement: “City Police Officer Muhammad Ahsan Younas has taken stern notice of the incident and sought a report from SP Rawal Division. A case has been registered, culprits responsible for the abuse shall be arrested and brought to justice accordingly.”

Wife of Arsalan Qureshi also shared their side of the story:

#ZoobiaMeer is step sister of my husband, she is telling a lie that we have forcefully signed registry. I am 6 month pregnant: #Bisma (The wife of Arsalan) pic.twitter.com/bo5DYZlL0g

Twitter also is riling up against the culprit and his wife for the heinous crimes they have committed.

If anyone has any information about this couple please go to relevant authorities.
To their relatives, just look at the video and boycot this piece of shit.
For property, he beat his real mother, abused her, cursed her.
Ya Allah is shaks ko barbad kar.#zoobiameer pic.twitter.com/yy9DgGxQav

#zoobiameer
astagfirullah! I have never seen such a lousy man .God will surely punish you pic.twitter.com/RdBdtdEDyX

they beaten their mom and still giving excuses. EVEN IF SHE KILLS YOU, YOU HAVE NO RIGHT TO QUESTION HER AUTHORITY. Such is the worth and command Islam give to mothers.#zoobiameer

People are giving full support and demanding Justice for Zoobia Meer and her mother and #ZoobiaMeer has been trending on top all night.