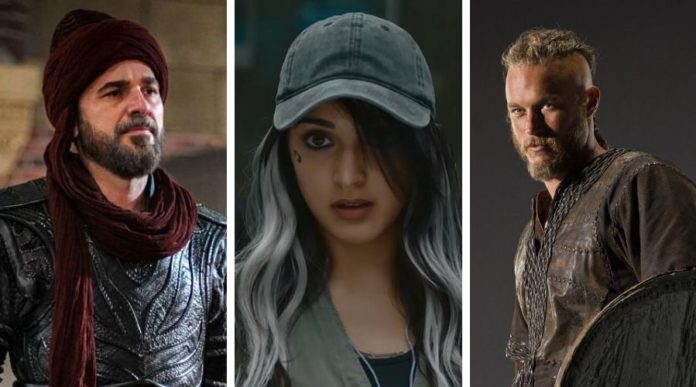 With the lockdown on endless extensions and all the places to hang out with friends and family now closed with “social distancing” protocol to be followed at all costs, people need to find activities in the safe haven of their homes.

And what better than to watch some entertaining new series or walk down memory lane with some classics. Netflix though is the reigning king of streaming in Pakistan, we have listed 12 of the best alternatives to Netflix for more or different variety and if you have not subscribed yet to Netflix, check out the options below.

Reported to have more than 150 million subscribers worldwide, Amazon Prime Video is a paid subscription service offered by Amazon that gives users access to original shows and videos as well as movies and shows from other production houses.

An American subscription video on demand service, Hulu has 30.4 million subscribers. Hulu has a combination of original content and also some of the most classic movies and shows.
Hulu is of course, best-known for its original series, the award-winning dystopian drama,

In February 2020, it was announced that the international expansion of Hulu will start likely by 2021, so as of now Hulu can easily be accessed with the use of VPN.

Only a few shows and movies old, Apple TV is a streaming platform by Apple itself.
Apple has original content only that has amongst it hit shows like “See” starring Game of Thrones Royalty “Jason Momoa”, Thriller supremacy “M.Night Shamaylan” also has directed a show for Apple TV called “Servant”, and the latest “Defending Jacob” starring Chris Evans and much more.

Iflix is a free and subscription video on demand (VOD) service focused on emerging markets, with partnerships with over 150 studios and content distributors globally.
As of April 2020, Iflix has more than 25 million active users on its service, with over 2.5 billion minutes viewed in a month. Iflix has content from Indian, Pakistani, Korean, Hollywood and much more.

Customers can get 1 year unlimited access exclusively with PTCL Smart TV or 2Mbps and above Internet Packages.

YouTube is the widest online streaming platform in the world, but it is famous for original content on various topics rather than famous shows or movies. But some channels do offer this hat houses the licensed content, new and old, you might be looking for.
YouTube recently made a portion of its digital movie library completely free.
Some notable titles include: Legally Blonde and Legally Blonde 2, The Terminator, All Dogs Go to Heaven.

YouTube Premium is the “Netflix” of YouTube. While videos are normally available for anyone to watch online, there are usually ads before, after, and/or during each one.

One of the best free streaming websites available out there. With thousand s of shows and movies from all around the world, all you need is a fast connectivity internet and you are good to go.

Another streaming platform that have the best of Hollywood, Bollywood, Lollywood and more is Starz Play. Pakistan’s premier cinema chain launched the venture titled Starzplay by Cinepax.

An online channel streaming platform is SlingTV where you can easily access channels like NBC, ABC, Fox and much more. This will let you unlock a huge content library that may not have been available to you on traditional steaming platforms as it will take you to the good old days of channel surfing.

A free movie and series streaming platform that has a unique library and loaded with classics as well as new hits is SnagFilms. Categories like “Before they were stars” will definitely get you hooked on this website as they categorize their films uniquely hence amplifying excitement.

One of the most famous and old online movie and series streaming platform is Putlocker and it is absolutely free. There is nothing that cannot be found on Putlocker, from anywhere in the world.

With variety of free movie and shows, PopcornFlix is one of the best online streaming platform. The website is so easy to use. There is categories split between “Most Famous”, “Most watched” and much more, making it easy for the user to select.

With “No Sign Up” required, Vex movies is a great place to watch all your favourite shows and movies from anywhere, absolutely free. VexMovies provides thousands of movies and TV shows across different genres. The website has an easy interface.

So now that you have multiple alternatives to Netflix, get busy and don’t miss out on an “all quarantine binge session” today.