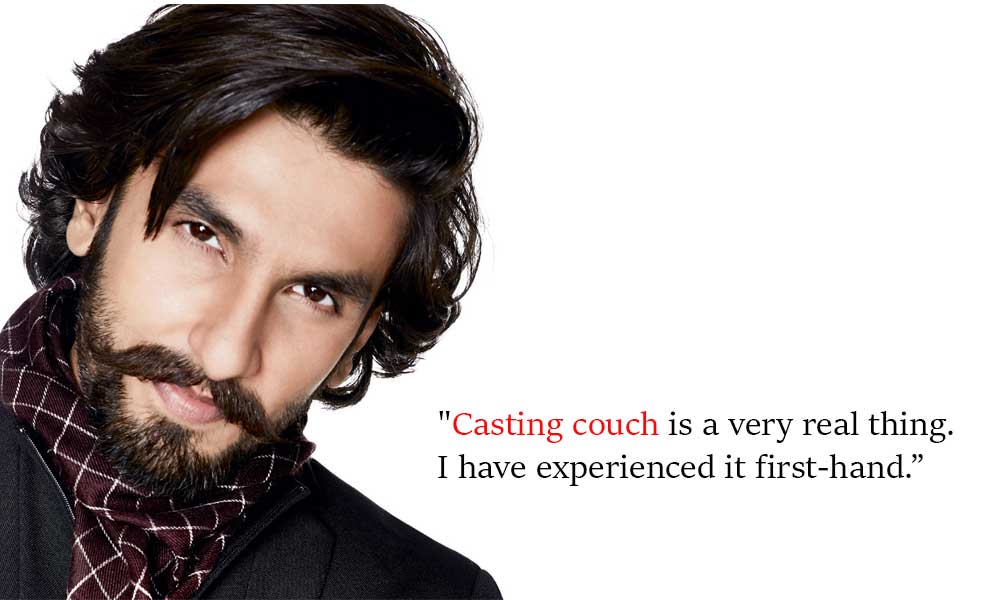 The glamorous world of Bollywood has a dirty and complex side that often surfaces in media controversies, sex scandals and the dirty business of casting couch.

If you aren’t born with a silver spoon in the B-town, then there are high chances that you have to climb up the ladder by developing connections with the people who can help you go up.

In simpler terms, the Bollywood bigwigs aren’t afraid of exploiting junior artists or aspiring stars. They’ve been found guilty of asking sexual favours in return of lead roles. What’s surprising is casting couch cases aren’t just limited to females in Bollywood but male superstars like Ranveer Singh have admitted to being victims of the casting couch.

Here are some of the stars who have become the victim of casting couch and have shared their experiences and thoughts on this matter:

Kangana has always been vocal about controversial issues in Bollywood. The National award-winning actress faced a similar a dangerous casting couch situation but was able to shut it off.

At the time of Tanu weds Manu, Kangana had a great concern while her audition was scheduled and she was asked to have sex after the meeting was over. However, she immediately denied the proposal and stood by her values. The actress made it to social media to let the world know about how cruel the world is that one has to provide sexual favours to get a role.

She also shared how she feels about this dirty practice of casting couch that has affected so many people:

“Fortunately, I never had to go through the casting couch. Honestly, I feel somebody has to be really dumb to think that they’d get a role for sleeping around. And I have never been so dumb — not even at the age of 17 when I started my career. People should use their common sense. It’s stupid if you actually believe someone who tells you that he or she is giving you a role only if you please him or her.”

“If the casting couch route was so easy, then all the women from the red light area would have been superstars today.”

Yes, you read that right! The Bajirao of Bollywood who is fearless and bold had to go through casting couch incidents during his struggling days. When it comes to being courageous and bold, Ranveer has always been one of those celebrities who talk whatever they have faced. In an interview, Ranveer shared his experience on how he was asked for the sexual favours when he was new to the B-town.

“Casting couch is a very real thing. I have experienced it first-hand when I said ‘no’ (to his demands), he cried like a jilted lover. Later, I got to know that he does it to everyone.”

The Bajirao Mastani Actor faced this challenge when he went to casting director’s home in Andheri and the director without even looking at his portfolio asked him to be open to “take and Touch”. Didn’t imagine a star like Ranveer had gone through this? 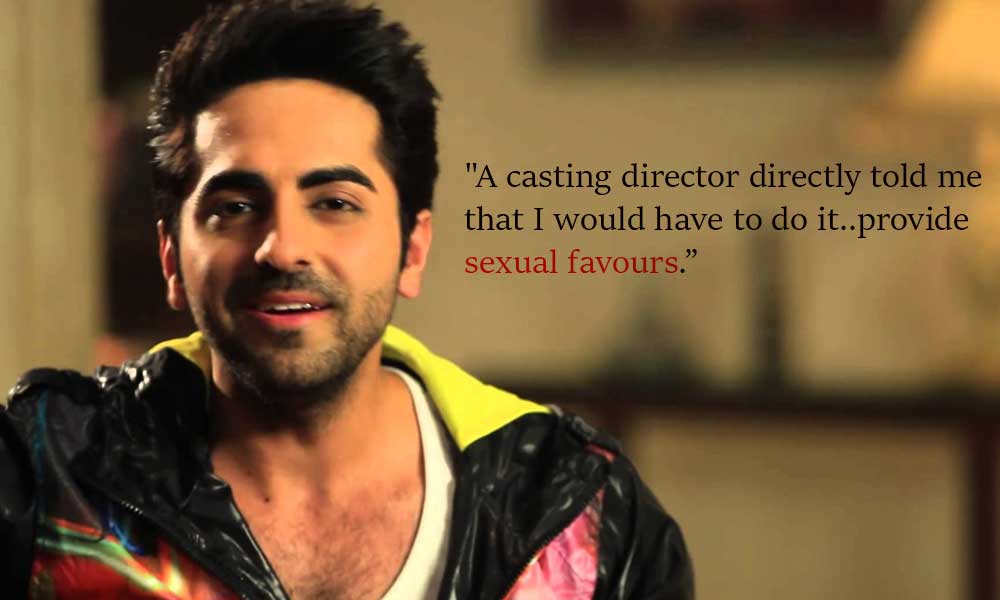 Spilling the beans on the casting couch, Ayushmann Khurana who gained stardom through his hosting gigs and off-chart movies said he had faced a similar issue when it comes to the casting couch.

Ayushmann opened up about his experience and the reality that stars are facing today. The actor recently spoke about how he went through casting couch experience while he was entering into the Bollywood. He said that a casting director asked for sexual favours from him in exchange for a role. He shared his views as:

“In fact, I have been through that initially when I was part of the industry. I was a TV anchor, so a casting director directly told me that I would have to do it (provide sexual favours). So, I told him that if I was not straight, I might have given it a thought, but I can’t do it. So yeah, the casting couch exists, but eventually, it’s your talent or potential as an actor or performer which would last. You don’t need to give into such stuff,” 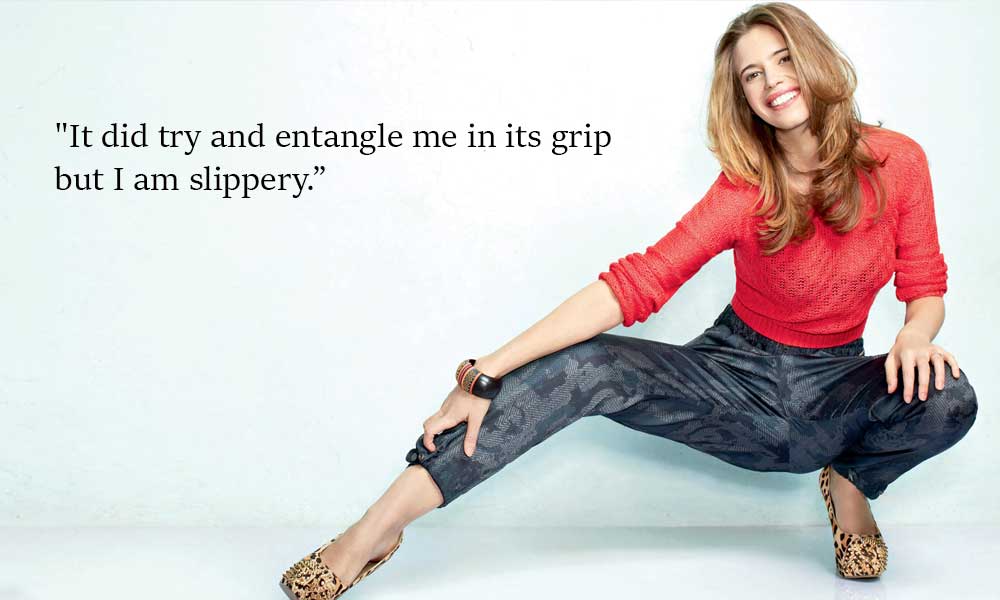 Kalki is among a handful of Bollywood actresses who have been vocal about social issues such as child abuse, sexual abuse, women violence. No one would have thought that the super smart actress once went through casting couch situation but she was lucky enough to slip it through. In an interview she shared about casting couch as follow:

“I must say, of course, it exists! It did try and entangle me in its grip but I am slippery, I always managed to get out of it. The minute I felt uncomfortable, I walked away!

The crux of the matter is that a bad actor, however much she works her way through the casting couch, will never sustain. She still remains a bad actor! The casting couch is not the answer to any aspiring actor’s route to success.”

No wonder why Kalki is known as the beauty with brains!

Tisca Chopra’s experience of casting couch dates back to the time when she was a nobody in the film industry. While joining the list of Bollywood stars who have spoken about their experiences of the casting couch, Tisca reveals how she was able to act smart and sneaked out of such an incident. Her story will surely make you laugh but at the same time, it gives us major thoughts on how these stars have to go through such issues.

The story goes like this – earlier in her struggling days, she got a call from an acclaimed producer who told her that he wants to cast her in his upcoming movie. Excited as she was, she went on to shoot the scenes, on the third day of the shoot the producer asked her to meet in his room at 8 PM to discuss the script.

Tisca, surprised and pissed, plotted a trick where she asked the hotel receptionist to direct all her calls to his room and thus it worked, making him confused Tisca found her way out of this incident.

In an interview, she expressed her thoughts as:

“It’s a question of supply and demand. The supply of actors is far greater than their demand and so the directors and producers demand something extra for giving chances to aspirants, I have never heard of anybody raping anyone.”

” I devised a cunning plan and managed to escape from the situation. ” You call their bluff and say I am better than this, ‘I can do this on my own merit’,”

The Israeli model who came to Bollywood to start her career accused acclaimed director Subhashish Ghai of inappropriate behaviour.

No one was aware of this until Rina wrote a book named ‘Dear Mr Bollywood: How I Fell in Love with India’ where she wrote about her struggling days in Bollywood and how the director offered her to take her to his bedroom. In her book she has quoted what Subhashish Ghai told her:

“I want you to trust me and surrender to me completely. I will take you around with me everywhere and you will see how your life will change,” is what Rina has quoted in her book with reference to Subhash Ghai.

Payal Rohatgi and Dibakar Banerjee casting couch news went viral and it raised many controversies too.

Payal accused Dibakar of asking sexual favours from her when he invited Payal to his home, commented about her weight gain and asked her to lift her shirt up to show him his stomach.

Rumours have it that it was Payal that first contacted Dibakar to get her a role in his upcoming movie ‘Shanghai’ for which Dibakar asked her to audition.

According to Dibakar, he politely asked Payal to give a screen test if she wanted to play the role. We aren’t sure which side of the story is true but rumours have it that Payal’s story became the talk of the town and ended up in a controversy.

In the history of casting couches in Bollywood, this incident dates back a long time when the actress Preeti Jain accused the well-known Fashion director Madhur Bhandarkar of asking sexual favours from her and raping her several times.

Reports suggest that Preeti filed a case in 2004 claiming that the director molested her and raped her in exchange for a role in his upcoming film. Though in 2011, the long-awaited case was put to end while freeing all the charges from Madhur Bhandarkar.

Believe it or not, casting couch today has become a common trend whereby the powerful and the strong people in Bollywood asks for sexual favours from upcoming artists and making them vulnerable sometimes to choose between their career or their self-respect.