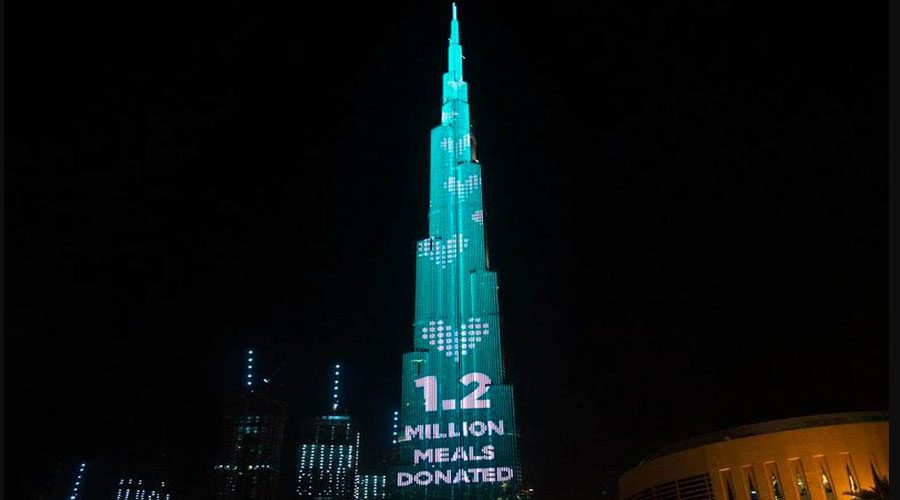 World’s Tallest Donation Box target, initiative illuminated the entire façade of the Burj Khalifa, the highest urban edifice in the world, with a total of 1.2 million lights, achieving its ultimate goal of collecting individual, community and institutional contributions equal to 1.2 million meals.

The initiative achieved these results just one week after its launch, in support of the “10 Million Meals Campaign“ aimed at providing nutritional support to individuals, vulnerable families and groups most affected by the repercussions of the global epidemic Covid-19.

The World’s Tallest Donation Box at the Burj Khalifa hits the 1.2 million-light mark, achieving its target of collecting 1.2 million meals to support the #10MillionMeal initiative in a week, thanks to individuals of more than 110 nationalities. pic.twitter.com/vzOYau7S8Y

The UAE launched the “World’s Tallest Donation Box” initiative on May 2, as part of the “10 million meals” campaign, with the aim of providing 10 million meals for the needy in the country.

The campaign allowed the purchase of lighting points to illuminate 1.2 million lights for the 828-meter-tall Burj Khalifa, as the front of the tower was lit whenever a new donation was received.

5 Bollywood Celebrities Who Own Lavish Homes in Dubai

In just one week, the campaign’s website, organized by the Mohammed bin Rashid Al Maktoum Initiatives International in partnership with Burj Khalifa, received tens of thousands of contributions and donations; from more than 110 nationalities and a wide range of companies, institutions and commercial groups from various business sectors, equaled the goal The final total of the campaign collects a value of 1.2 million meals to light the entire Burj Khalifa facade of “1.2 Million Bright Spots”.

The initiative received an extensive media follow-up from the local media with its various platforms and a number of global media that saw in the innovative idea of ​​the campaign a message that promotes hope for humanitarian cooperation and solidarity in exceptional circumstances such as the one in the world today, to form the Burj Khalifa, which is one of the most famous urban landmarks in the world with a rise 163 floors and 828 meters longest, the beacon of human solidarity on the surface of the planet with those in need and affected by the Covid-19 epidemic that affected the whole world.

As the “World’s Tallest Donation Box” initiative achieved its goals and concluded its activities, the “10 Million Meals” campaign, which was launched under the directives of Sheikh Mohammed bin Rashid Al Maktoum, Vice President of the Emirates Prime Minister and Ruler of Dubai, continues, under the gracious patronage of the campus of Sheikh Mohammed bin Rashid Al Maktoum Sheikha Hind bint Maktoum bin Juma Al Maktoum, Chairman of the Emirates Food Bank’s Board of Trustees, to provide nutritional support to the needy, needy families and the groups most affected by the repercussions of the Covid-19 epidemic and the lowest-income segments across the country throughout the holy month of Ramadan.

On the occasion of the conclusion of the initiative, Mona Al Kindy, Executive Director of the Mohammed bin Rashid Al Maktoum Initiatives Foundation, said: “The UAE community, with its various individuals, institutions and slides, was keen to provide support and extend a hand and help to those in need, embodied in the record time in which the longest donation fund in the world achieved its goal The final, which reflects the root of the culture of giving that was established by the wise leadership of the Emirates”.

In addition to the material donations, the contributions of the business and corporate sectors to the “World’s Tallest Donation Box” initiative have been added to add innovative contributions such as promoting the “Amazon” global e-shopping platform for the initiative through its website and allocating the fast-food sector more than 100 thousand meals for the initiative presented by each of the “Burger King”, “McDonald’s” and “Texas Chicken” chains in the form of vouchers are offered to the beneficiaries.

The digital music platform “Anghami” also donated the production of a special song in support of the campaign entitled “Together Stronger” by the artists Khalifa Al Nasser and Mojo, proceeds to download it fully to support the initiative, in addition to allocating awareness and awareness advertisements and a list of 1.2 million songs In support of the initiative.