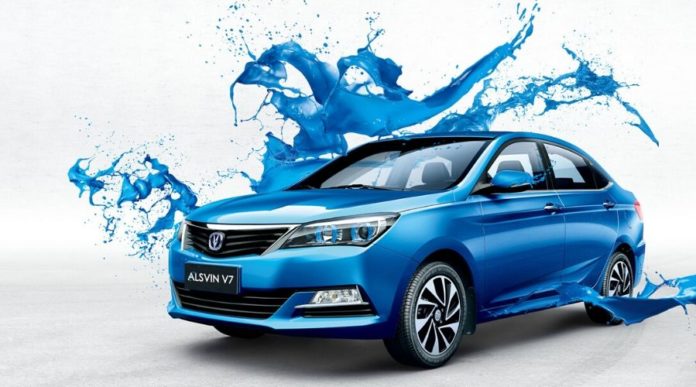 Coming as a great news for the car crazy fans in Pakistan, Chinese company Changan’s Alsvin Sedan has been spotted on Pakistan’s roads recently. Camouflaged in Zebra print, the car was seen driving in Islamabad.

The car observed doing test runs on a road in Islamabad is a 3rd generation sedan.
Earlier in June 2019, Master Motors & Changan Automobiles of China, had signed the joint venture (JV) agreement which remains one of the major developments in the auto sector, courtesy Auto Policy 2016-21. The JV agreement will see import and assembling of Changan branded LCVs, MPVs, SUVs and Passenger cars in Pakistan.

Upon launch the Changan Alsvin will take on the likes of Honda City Aspire and Toyota Yaris AtivX in our market.

The line of SUV and sedan will boost the Changan sale and makes its name popular in the local auto market. Alsvin is already available in the international market with all advanced features.

Yet another model in the series, Alsvin V5 is a subcompact sedan produced by Changan and is a re-styled, deluxe version of the original Alsvin sedan, the production of which was ended in the first half of 2013. Due to a similar front grille design, the V5 is considered a look-alike of Mazda 3. Power comes from a ‘BlueCore’ 1.5-liter engine with 114hp, mated to a five-speed manual or four-speed automatic transmission.

The Alsvin measures 4530 mm in length, 1745 mm in width and 1498 mm in height with a wheelbase of 2610 mm. Changan Alsvin V7 is bigger than the 5th gen Honda City and smaller than the 11th gen Toyota Corolla, so it’s a perfect fit between the two. However it stands taller than both Corolla and City.

It is also reported that the company will introduce its more articles, including SUVs, crossovers, hunchbacks, and mid-sized Sedans in Pakistan.