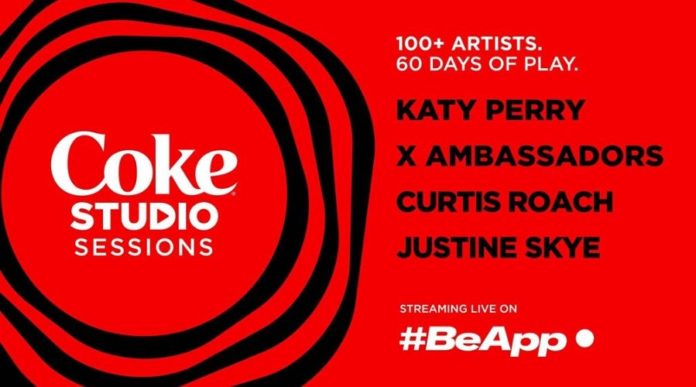 Many big initiatives have been taken to help the organisations and frontline workers working to help many during this widespread pandemic that has caused millions their lives.

Coke Studio also has stepped up and is bringing together a virtual music festival that will feature 100 local and international artists and all the proceeds will go to within the International Red Cross and Red Crescent Movement based on the communities that need the most support.

According to the Coca Cola, the idea behind the sessions was to “refresh the world, one virtual performance at a time.”

It is in partnership with Be App, a new live-streaming platform, that such an amazing initiative has come into existence. In a Facebook post, it was announced that the sessions will be held with over 100 international artists, including including Katy Perry, Anitta, DJ Khaled, Bebe Rexha, Miguel, the cast of Hamilton, Steve Aoki and many others. The show is being called Coke Studio Sessions.

Download BeApp today and attend live performances of your favourite artists at #CokeStudioSessions, the virtual music festival where you can also help communities affected by COVID-19 globally and make a difference through music,” the Facebook post said.

You can also find all the details about this virtual music festival on their website.

The virtual music festival will run for 60 days and fans will have the opportunity to donate to the cause.

Three performances will stream per day on #BeApp at 7 p.m. ET, which can be downloaded for free on iOS or Android devices, as well as the Coca-Cola YouTube channel. #BeApp also will rebroadcast performances within a 24-hour period for those across the world who could not watch them live.