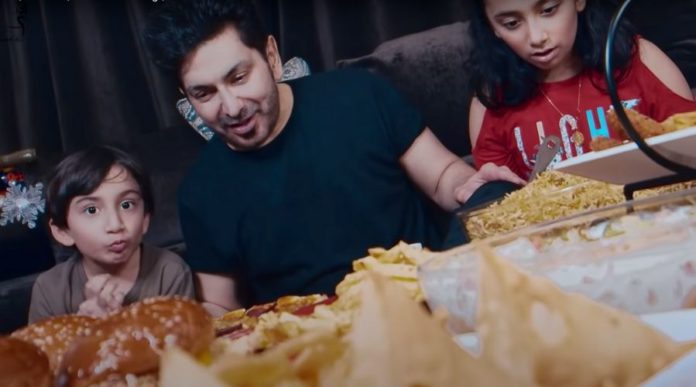 Lockdown has been a very creative and productive space for many and many have used their talents to create a number of new dishes including breads, dalgona coffee that became an Instagram trend. This has made gaining weight an easy gig and that is exactly what Singer Faakhir chronicles in his latest song “Meri Double Chin”.

This multi starrer rap style music video shows a normal day in the life of anyone in the now quarantined world, where schools have closed and work from home has become the norm. This scenario where the couch has become where you work from and also rest, prompting everyone to snack repeatedly throughout the day with the likes of burger, pizza, chaat, samosa and much more, causing people to have double chins.

Faakhir’s children Simone and Naael are also featured in the song and sing along with their father saying that online classes are nothing but increased stress leaving the weekdays and weekends all mixed up.

Taking to Instagram, Faakhir said: “Directly affected and inspired by the Covid19 lockdown, Simone & Naael came up with this song, #MeriDoubleChin. Recorded in the comfort of their Dad’s home studio, it’s their first serious musical effort!”

Faakhir also gave a shout out to all his friends for taking time out to become a part of the video.