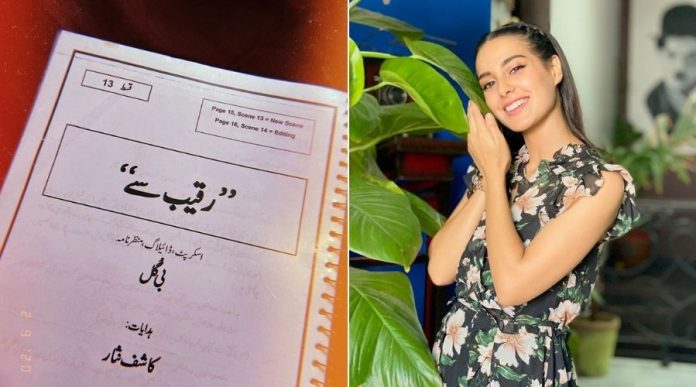 With the hit drama serial “Jhooti” ending, audiences have grown in their fandom for the talented actress, Iqra Aziz. And now to give what the audiences are craving, Iqra Aziz is coming back to our television screens as she signed a serial called “Raqeeb Se”, written by Bee Gul and directed by Kashif Nisar.

On Wednesday, Iqra Aziz took to Instagram to share the amazing news by sharing a snap of the script.

The image shows the script of the 13th episode, which could mean that the shooting is already half way done as the actress prepares for the current episode.

The actor-director duo have previously worked together in Ranjha Ranjha Kardi.

Recently director Kashif Nisar also received much praise as his drama “Inkaar” claimed much praises from the audience. And judging by the socially powerful content and amazing performances of the actors in his previous projects, Kashif Nisar will not fall short even on his latest project and it is going to be worth the hype.

More details of the project are yet to be released.

Making waves in the industry with her quirky and hilarious performance in “Suno Chanda” and many more, Iqra Aziz also has a YouTube Channel that has a huge following and the fans get a chance to pek into the personal life of the starlet.