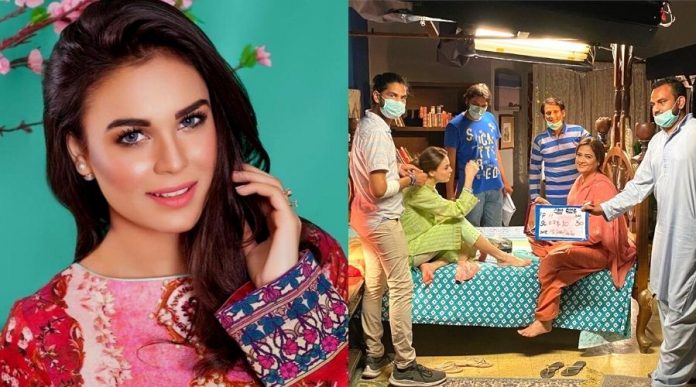 The rising star who made a mark on her audience with super hits like “Parchi” and “Teefa In Trouble”, Mah-e-Nur Haider Khan is the Pakistani actress who is all set to bring her audience her latest drama on ARY Digital.

The actress shared the news on social media, saying: “#BehindTheScenes
So finally I am pleased to share the news with my #instafam !!

After your endless requests for me to do a play, I am finally giving you guys one!!
I have been busy shooting for this play hence haven’t been able to post much lately, as we are still shooting for it, cannot give you all a date yet BUT it’ll be out very soon!! 💙
@bigbang.entertainment @arydigital.tv”

The drama has started shooting while following strict SOPs and is untitled for now.
The serial is being produced under the banner of Big Bang Entertainment.

In the shot with Mah-e-Nur, veteran actor Humaira Bano who has been recently in the mega-hit serials “Ishq Zah-e-Naseeb” and “Deewangi”.

Apart from no other information has been revealed but we are definitely excited to see the talented rising star again on screen as took a break from work after she got married and she appeared in the Strings’ music video for Raat Shabnami.

In 2020, alongside her modeling assignments, she appeared in Daniyal Zafar’s music video for So Long Goodbye.