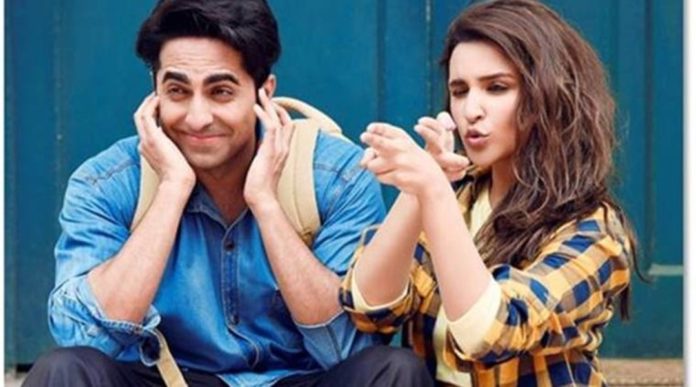 If you’re waiting to hear Parineeti Chopra sing along Ayushmann Khurrana, your wait is about to get over. In addition, the two adorable stars have revealed the first look and release date of their upcoming movie, Meri Pyaari Bindu.

The adorable couple will instantly remind you of Juhi Chawla and Aamir Khan in the first poster.

Meri Pyaari Bindu is a romantic story, in which Ayushmann Khurrana is playing a Bengali guy role. Abhimanyu Roy is the name of the author he will be seen doing the role of, meanwhile Parineeti will be seen struggling to become a singer.

Parineeti Chopra is all praises for his co-star Ayushman and said, “He is very sweet and has ended up being a very close friend of mine.” She further mentioned that how she is enjoying her singing passion with Ayushman on the sets and how the actor is always motivating her to sing. “I have finally found a co-star in front of whom I can sing as much as I want. He does not stop me. In fact, he joins me.”

The movie’s highlight seems to be Parineeti’s singing talents. Furthermore, the adorable diva took over the internet a few days back posting a video of her singing in the movie.

Both Bollywood celebrities have had a couple of rough years in terms of successful projects. Besides Parineeti’s hot cameo in Dishoom did not garner much praise and Ayushmann’s Hawaizada failed at the box office.

Let’s hope Meri Pyaari Bindu will turn the luck for both celebrities.  The film will set to release on May 12, 2017.