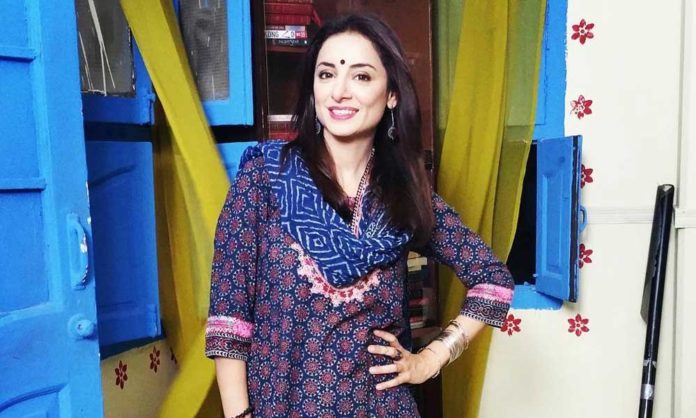 The most awaited TV One drama Seeta Bagri hit our TV screens earlier last week and left everyone impressed.  The production of Cereal productions, Seeta Bagri features the talented and the gorgeous Sarwat Gillani as Seeta as a Hindu girl in Pakistan.

The first episode begins with the narration about the Hindu Community residing in Pakistan who chose to stay in this land after partition. The main focus behind this ideas was to make the audience understand how diversified our country is and if the Hindu community chose to live in India they would not have been a minority and would not have been judged.  The episode then takes us to introduced a Hindu family settled in Karachi.

The episode then takes us to a Hindu family settled in Karachi.

But what’s new? The introduction was not merely about showing the faces and starting the typical description but it was cheerful, vibrant and extravagant.

The family had two members, Badrinath (played by Qavi Khan) and his daughter Seeta ( played by Sarwat Gillani) who belong to a tribe called Bagri. Growing up a daughter, Badrinath did all he could to give his daughter a comfortable lifestyle. He has two tenants Ratan Lal (Syed Jibran) and Mala Rani (Shameen khan), both of them are orphans. Moving forward, the drama highlights the growing love that both Seeta and Ratan share with each other. Mala, Ratan’s sister supports their love and is well aware of their feelings for each other.

On the other hand, Badrinath who suffers from epilepsy still tries to keep himself busy and working because has a young daughter and he has to get her married too. The twist in the first episode highlights that Ratan, who loves Seeta is facing financial crises. Seeta motivates her lover to complete his education so he can find a good job, settle down and ask for Seeta’s hand from her father.

Ratan works as a carpenter and is under a huge debt that he has to pay-off. His sister, Mala who is shown as a young and peppy girl believes she should support her brother financially and should do something but can’t figure out what.

On the other hand, Seeta has always been the kind of the person who empowers everyone and herself from education and always focuses on the importance of education.

We are introduced to another character here, Nandini Das (Bushra Ansari) a middle-aged woman who resides in Hyderabad and runs a bangle business. Unmarried, she wishes to find the man of her dreams for whom she would sacrifice everything and anything. Nandini has an admirer who is willing to sacrifice everything for her but Nandini doesn’t see him as the man she would want to get married to.

The admirer is a “Saeen”, a wadera and due to his power he threatens Nandini that if she can’t become his lady love he will kill any man she ever chooses to marry. Nandini, being a brave and confident woman figures Saeen’s schemes and run away from her homeplace and land in the city of lights Karachi where she meets Ratan.

Yes! you might be thinking right, Nandini finds Ratan charming and starts falling for her.

The first episode also introduced two characters Aleezay Ahmed & Taimur Zaki, who will be seen playing the role of  social workers. Seeta Bagri drama is the first ever production of the famous Pakistani TV actor Adnan Siddiqui and he is trying his best to make sure that his new serial hits the TRP’s as the drama serial entail a different story line and strong actors playing the lead roles.

Lately, we have observed Sarwat Gillani being very active on social media and talking about her role in Seeta Bagri. The story line revolves around the Pakistani-Hindu girl Seeta and her life as a minority. Now this seems like pretty different story line than the cliche romantic dramas no?

Seeta who fights for her rights to coexist with Muslims and her Muslims friends show great support to her in all the hardships that she faces. besides minority rights, another major issue that has been highlighted is of women’s education where Seeta takes the charge and promotes women education by educating underprivileged girls in her community for free.

With a unique plot, this story is set to hit the boundaries as it provides a completely new dimension to the drama industry.Sarwat Gillani’s powerful acting skills will surely create a strong impact and will deliver this positive message loud and clear to the masses.

Adnan Siddiqui as a producer states, “As it’s my first production I want to take on a project which is not only different but has beautiful message embed into it. I strongly believe that one shouldn’t be different but with a class of difference and I have done the same with this drama.”

What’s more? the opening soundtrack of ‘Seeta Bagri’ has been sung by renowned Indian Singer Sukhwinder Singh with the composition done by Sajid-Wajid and the track also features the band, Udan Khatola. The drama contains a colourful Holi song that has been sung by Nimra Ali and choreographed by Nighan Hussain.

The drama will be aired on November 17th at 8:00 PM every Thursday.

Here are some of the BTS shots especially of Sarwat Gillani and her co-stars you just can’t miss: