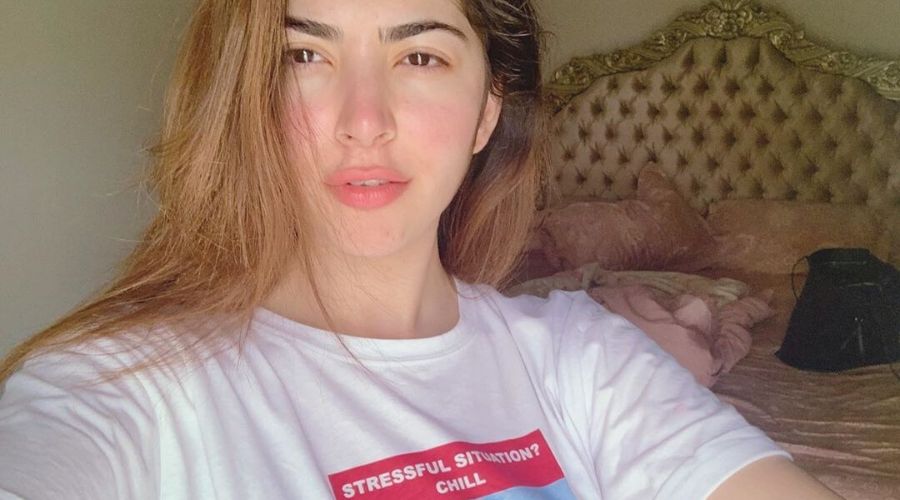 Ever since her appearance in the Shoaib Mansoor’s movie “Verna”, Naimal Khawar has caught the eye of millions of Pakistanis. She also ranked number one on Google’s Most searched In Pakistan in 2019. With her drama serial “Ana” on Hum TV hitting highest viewership coinciding with her marriage to the very popular and controversial Hamza Ali Abbasi, Naimal Khawar became viral in Pakistan.

The nation became smitten with “Verna” actress as her wedding videos and pictures circulated around social media. And now as the quarantine hit, Naimal Khawar has again caught the attention of thousands by documenting via Instagram her routine during the lockdown.

Here are some of the things our favorite social media personality has been doing while she is under the lockdown like all of us:

Encouraging Others to #StayHome

Naimal Khawar with 1.2 million followers has a huge fan following and keeping that in mind the painter and actress also posted a very heartwarming and encouraging message for her fans.

She launched the campaign #StayApartStayTogether with Samsung Pakistan where she has asked her fans to post videos with the hashtag, of how they are connecting with loved ones and staying productive under this Global Lockdown.

Naimal also tells how she is keeping busy by setting up her new house and plans to post a lot of videos in the coming weeks documenting her time at home in quarantine.

What seemed like a long-overdue project has finally come to its conclusion as Naimal Khawar and Hamza Ali Abbasi build their television table now that they had a lot of time in their hands due to lockdown.

Naimal captioned: “After a joint effort, we finally managed to build our television table 📺 Staying at home can be fun too. Stay home and stay safe guys 💪🏼♥️”

Naimal also posted a video where she has been seen redecorating a corner of her house as she encourages people to decorate all the small nook and crannies of your home as this is the place where we are going to stay long hours under the lockdown and each corner of your home should make you happy.

Naimal in this video can be seen pushing around plants and tables, putting frames and decorations, just to make the small corner of the house shine.

Naimal Khawar is also a major food buff and loves to eat as can be seen on her Instagram profile. The actress has taken time in quarantine to experiment with her cooking skills and posted scrumptious recipes.

Naimal in her the video captioned: “Guess who made salmon and shrimp? 👩🏻🍳🍤🐟🥬 #StayApartStayTogether #AtHome #Note”

With her preparing the recipe, Hamza Ali Abbasi can also be seen helping out in dicing out the bell peppers. This recipe is sure to be tried as it not only looks tasty but also healthy.

Like all of us, Naimal Khawar and Hamza Ali Abbasi have also taken this time to bond and relax with each other.

Naimal Khawar in her Instagram live stories posted how Hamza Ali Abbasi was teaching her to “Juggle” like a pro.

Both of them also are just taking a break and chilling out as it can be seen in this recent post by Hamza Ali Abbasi.

Naimal Khawar’s Mantra of Staying home, staying happy and being productive seems very appealing and one to be tried out.