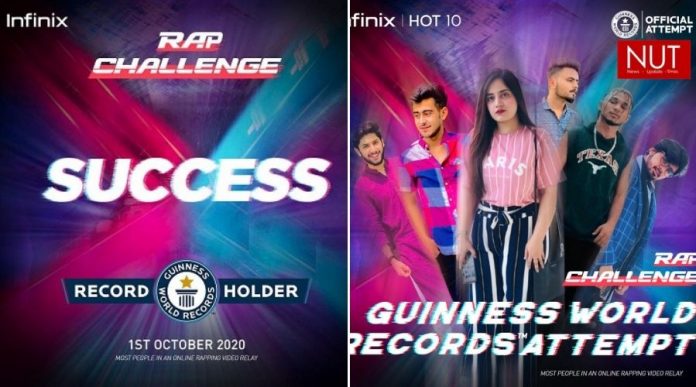 Smartphone giant, Infinix recently conducted an “online rap video relay” in which Pakistani TikTokers and other artists took part and succeeded in setting a Guinness World Record for for the lion’s share of people in an online rapping video relay. Truly, An excellent achievement for Pakistan.

These 5 participants from Pakistan includes Asif Bali, who is a YouTuber, Lerry Khan, a TikTok star with over a million followers and Hassan, who is a fellow TikTokers, Moaz, and last but not the least Taimoor.

Moreover, Infinix Pakistan had brought their own representative from Pakistan named Zuofyshan Ahmer, the community Executive, who enthusiastically took part in the rap video relay.

Pakistani record-makers rapped in different languages including Urdu, Chinese, Arabic, Nigerian, Hindi, etc using the same sound-track and the relay video was broadcasted live all over the internet.

The attempt for setting the record was made on September 30th and kept going for a whole hour and 11 minutes.

The reason behind Infinix Pakistan conducting an online rapping challenge was to celebrate the launch of its ultra-modern device, the Infinix Hot 10 and to show people that they can all have fun and enjoy even if they are at distant.

Mr. Joe Hu, the country head from Infinix, said during the event that “We are striving to create a great user experience that goes beyond the device itself and We were amazed while experiencing the energy and passionate response this fun event had brought to us, and how people from around the world came together to create something truly amazing.”

Also, The Guinness World Record has officially registered the record made by the Pakistani artists on the following event and Infinix has also released a video in which we can enjoy watching the talent of all the participants who made great efforts to set the new record.

Why Everyone demands a High-Quality Camera Phone in today’s era?