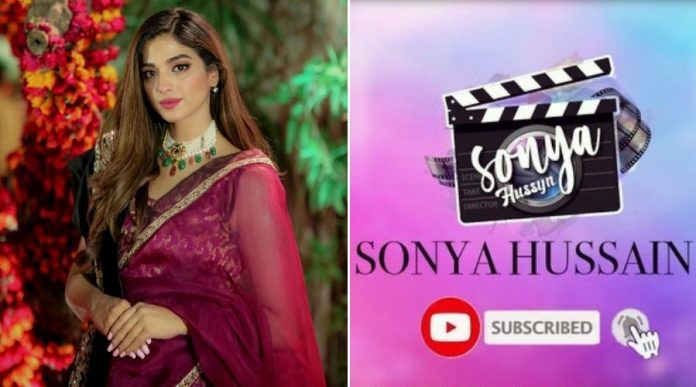 With top actresses of the industry like Saba Qamar, Iqra Aziz, Ayesha Omar and many more joining YouTube to bring exclusive content to their fans, the talented actress, Sonya Hussyn, has also joined the platform to give a slice of life behind the camera.

Sonya Hussyn will be presenting what goes on behind the scenes of a drama or movie set and connect to her audience with a more personalized approach.

Sonya Hussyn can be seen shooting for her latest drama Saraab in her first YouTube video.
In the first video that Hussyn has uploaded on her channel, she has discussed mental health issues with Sami Khan, her drama Saraab’s co-actor.

Director Mohsin Talat is also heard presenting his views in on the topic.

Sonya Hussyn has been reigning high in the Pakistani Drama Industry with back to back hits like ”Ishq Zah-e-Naseeb” and the ongoing “Mohabbat Tujhe Alvida”, now her latest drama “Saraab” on Hum TV has got the audiences hyped.

The drama is the one where Sonya Hussyn will famously play a schizophrenic.

The drama is the story of a schizophrenic patient (Sonya Hussyn) and her lover (Sami Khan) and the innumerable obstacles and difficulties faced by them both due to this disease.

Coming to the screen is Sonya Hussyns take on a character who suffers from schizophrenia, and Hussyn hopes to educate people about how such people are as much human as everyone else and need to be cared for.