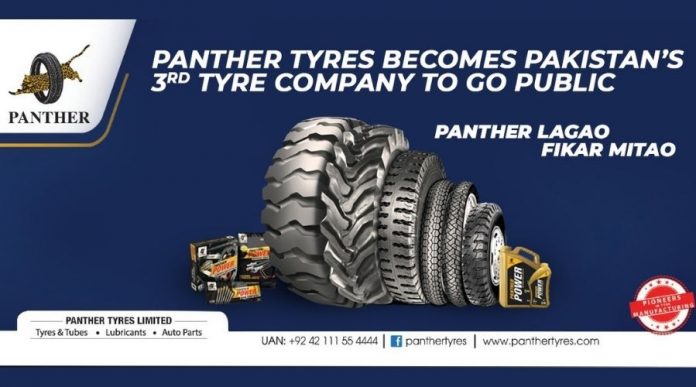 Panther Tyres Limited, a leading tyre Company, has applied to be listed on the Pakistan Stock Exchange (PSX). According to the notification issued by the PSX, the company has planned to issue 40 million ordinary shares at a floor price of Rs. 47 per share.

The company wanted to raise funds for the expansion of its operations and businesses in the local market and the export segments. The total expansion cost was estimated to be Rs. 3.066 billion and was to be financed by a mixture of Debt and Equity in the Debt to Equity proportion of 37.5 to 62.5.

This investment of Rs.3.066 billion will not only help the company to increase its production capacity but also provide an opportunity to bring-in new state of art European technology of tyre manufacturing. This technology will enable the Company to produce and sell best quality products at competitive prices.

Panther Tyres Limited is one of the largest tyre manufacturing Company of Pakistan and takes pride of being the first to introduce the local manufacturing of two, three-wheelers and industrial machinery tyres in Pakistan and currently has a stronghold in the two, three-wheeler and tractor tyre market. Over the time, the company expanded into other segments of the auto industry, including tyres for light commercial vehicles, trucks, buses, and earth movers. These tyres are being supplied not only in replacement market but also to OEMs as well.

The company has shown impressive performance in business and its sales have got doubled from Rs 5.59 billion in FY 2016 to 11.58 billion in FY 2020 at a CAGR of 20%. Moreover, as per the audited numbers of quarter ended September 30, 2020, the top line of company has grown by 31% over the same period last year which translated into the net profit margin of 5.75% exhibiting a growth of 133% over the corresponding figure.

The company exports motorcycles, tractors, rickshaws, LCVs, and truck & bus bias tyres and tubes to around twelve countries. It was awarded the EU E-8 marked certification in 2018 for its exports to European countries.

The recent 38 percent devaluation of the Pakistani rupee against the US dollar over the last two years (FY 2019 and FY 2020) and Govt. measures to curb smuggling and under invoicing have created a room of growth for tyre industry of Pakistan. This has made tyre & tube pricing competitive not in local market but also in international market. The management believes that its growth momentum in sales will continue in foreseeable future as well.