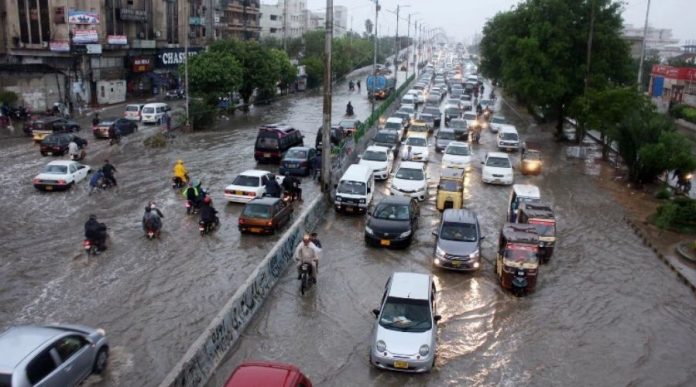 The City of Lights, Karachi, faced a heavy rainfall yesterday on 17 July 2020. Whereas the rain brought happiness to some people it also brought a massive destruction and chaos in the city, such as immense amount of drainage water on the local streets, floods, power break downs, electric shocks, fallen roofs, deaths and many other unfortunate incidents.

Reportedly, around 10 innocent lives were wasted and many people got seriously wounded due to different unfortunate incidents occurred by heavy rainfall yesterday.

The government has issued a legal evacuation notice to the residents of hundreds of buildings, which they fear may have poor building structure and end up demolished due to heavy rainfall.

The city of lights is in the ‘dark’ due to power break down, the electricity is unavailable in mostly areas of Karachi and the cycle of life has been stopped completely, especially in the poor areas of the city, electricity has been shut down for several hours and yet it is not confirmed when this issue will be resolved.

Furthermore, the streets of Karachi are flooded with rainy and drainage water, causing many unimaginable problems for the general public such as vehicle break-down, traffic halt issues, un-covered electric wires and many more.

It is also worth mentioning that many people in Karachi have complained that they are suffering from flooded rainy water entering in their homes and building even in hospital.

Here, have a little closer look at the current conditions of Karachi city after the rain. Such images and video show the true colors of state of governance in the city and how they are struggling to tackle such basic natural disasters.

Congratulations Pakistan! After decade long “development” PPP has been able to create the largest water park in the world in Karachi! At this point, it only operates seasonlly & features rain water mixed with sewage! Excited to see whats to come next! pic.twitter.com/ZItxQSSaSp

This is why any sensible resident of Karachi knows rain is generally bad – no bijli, roads becomes lakes

This is how Sindh Rangers helping the citizens of Karachi at this hour of night. I dont know where our political leadership is!!! #Rain pic.twitter.com/IOVqgQaxU5