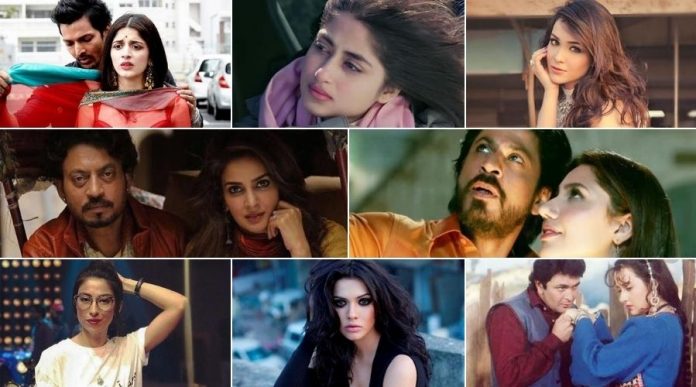 Pakistani Actresses are known across the world for their prowess and command in the art of acting and performance, and this has not gone unnoticed by our neighbor, India, who has for years continued to cast the leading ladies of the Pakistani movie industry in Bollywood movies.

The targets are many, as Bollywood continues to cast Pakistani actresses, the main being the incredible talent they possess, their command over the much elegant “Urdu language hence making dialogue delivery more powerful and lastly to lure the Pakistani market, which makes up for more than 50% of the profits made by Bollywood as there is a huge audience they can cater to here.

Here are some of the actresses who made it in Bollywood and brought out movies that caught many audiences.

Being as one of the boldest performers of the Pakistani Cinema, Qamar is the recipient of several accolades, including four Lux Style Awards, a Hum Award, and a Filmfare Award nomination. Qamar starred in the super hit movie “Hindi Medium” alongside Irrfan Khan and got much acclaim.

Mahira Khan has represented Pakistan on many platforms, becoming National Goodwill Ambassador for UNHCR in November 2019. The actress is praised for her performances in shows like Sadqay Tumharay, Shahr-e-Zaat. She starred alongside Shahrukh Khan in the critically acclaimed “Raees” but due to the India-Pakistan border conflict, the actress could not promote her film anywhere.

With smash hits one after the other, Sajal Ali has the all best Dramas in the bag for 2019. With stories that have rarely been seen on Pakistani Screens before, Sajal has diversified the choice of her roles. Sajal has also worked alongside Indian Legend Sridevi in the critically acclaimed “Mom”.

Mawra Hocane is one of the biggest stars of the Pakistani film industry with movies as well as dramas that have gone on to become mega-hits, Mawra’s talent for acting is undeniable. Mawra starred in the Bollywood movie “Sanam Teri Kasam”, which gave us the viral song “Kheench Meri Photo” but the movie failed to impress the audiences.

One of the most legendary actress of Pakistan with accolades in her bag while starring iconic projects. She has starred in a number of Bollywood movies and her first movies that made waves across the globe were “Henna”.

After giving ace performances in dramas and movies in Pakistan, Humaima Malik appeared in movies and item numbers in Bollywood. She got her big break with Raja Natwarlal in 2014, but the film didn’t generate much footfall in theatres and Humaima didn’t bag any other roles in India thereafter.

The beautiful and ever so controversial Meera Ji, made her big Bollywood debut with the project titled Nazar in 2005. Her bold role alongside Ashmit Patel generated massive controversy. She later appeared in Kasak, starring Lucky Ali the same year.

Making it big with “Big Boss” in India, Veena Malik started getting many movies offers In India after generating much popularity in the country. She first appeared in Daal Mein Kuch Kaala Hai in 2012, after which she had roles in only low budget movies and later some item numbers.

Also, a figure who generated a lot of controversy on both sides of the border was Sara Loren. Sara Loren made her Bollywood debut with the movie “Kajraare”, which gave her success in Bollywood after which her role in the movie “Murder 3” opposite Randeep Hooda made her a household name.

Appearing in a small role in the movie “Bhaag Milka Bhaag”, MeeshaShafi made her Bollywood debut. The ace singer has made a name for herself in the Pakistani Music and fashion industry and continues to impress.