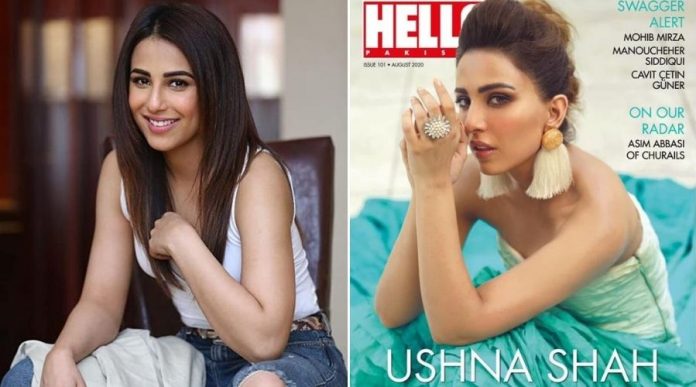 Ushna Shah with her success in the Pakistani Entertainment industry due to her innumerable stellar performances, is among the top reigning actors in the country. Recently the starlet appeared on the cover of the bestselling fashion magazine, Hello, giving us major fashion goals with her breathtaking shots.

The feature includes a full and detailed interview with the superstar giving the details of the happenings in her personal and professional life.

Ushna Shah is seen wearing an off shoulder, sky blue dress that goes perfectly glam look that Ushna pulls off without any difficulty. She accessorized herself with large tassel earrings and chunky oversized ring that completes her mega glam look.

The actress has been styled by the industry’s favourite Tabesh Khoji and perfectly caught on camera by Umair Bin Nisar.

The actress these days have been giving her full support to the effected by the devastating monsoon rains via her tweets and sharing stories from the people suffering and voluntary workers helping these helpless souls.

Ushna has been constantly active in the industry pumping out hits like Bashar Momin, Balaa, Alif Allah aur Insaan and earned Hum Award for Best Negative Actor for it. These days the actress is yet again winning hearts with starring as the good-girl “Roshni” in the hit drama serial “Bandhay Ik Dor Se”.