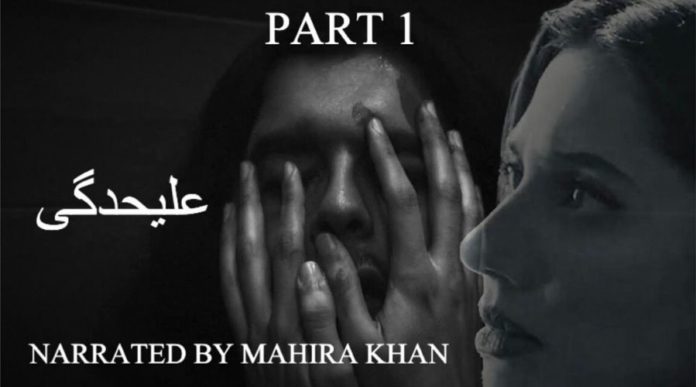 Yet another powerful short film comes from Ahmed Sarym, and there could be no more appropriate time or climate for its release than today as the film addresses one’s struggle with their own emotions.

Titled “Alehdagi”, Ahmed Sarym released the first instalment of the short film on his YouTube channel “Qissa Nagri” which has been narrated by the soulful voice of the famed Pakistani Superstar, Mahira Khan.

The clip released is the conversation that one has with his own soul, that why once a free self, a confident and independent self is now ashamed of its existence. The protagonist questions himself that in a world where everyone wears masks in an attempt to hide their true feelings, why does he always end up giving his heart when it is not needed or demanded by anyone. The first instalment Hamesha Yahi Hota Hai (It always happens this way) documents all these struggles.

The short film tries to build a narrative where we can see how depression, anxiety, phobias and much more ultimately lead to existential crisis. Alehdgi features Ahmed Sarym himself along with Maamen Qutubshahi conversing about the difficult questions that boil out of us due to overthinking. Earlier, he released his first short film which featured the late Zara Abid.

Ahmed Sarym at a very young age has been able to achieve much in the field of journalism and continues to gain appreciation and accolades for his work in the field.